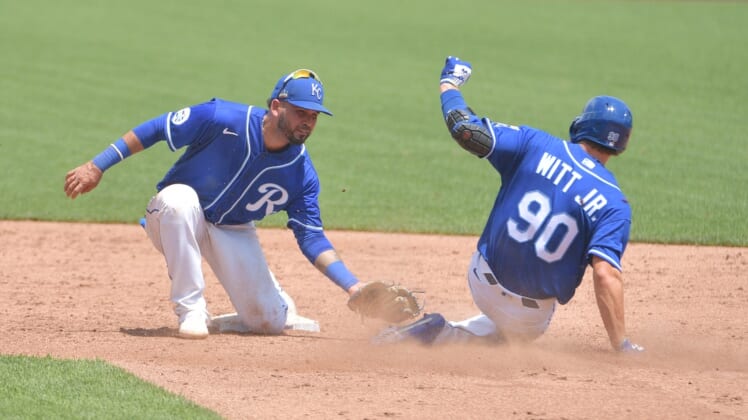 In an interview with former MLB general manager Jim Bowden, Moore said the 20-year-old infielder is not being ruled out for the Opening Day roster.

“I think we’re going to be very open-minded. When we came to Spring Training, we wanted to make sure we send a pretty clear message where we didn’t put unrealistic expectations on the player and just kind of let him go out and play,” Moore said. “Try not to create just kind of an aura around him in that clubhouse with a team that — we have some young players, but we’ve got some veterans as well. You do not want to create an uncomfortable situation for him. So we were careful with our messaging, but he’s come in here and just done a tremendous job. He’s earned the respect of all his teammates, and now that he’s been able to do that, I’m very much open-minded of him being on this team as we break this camp.”

The No. 2 pick in the 2019 draft, Witt has been slotted in the leadoff or No. 2 spot in the order and played second base. But Moore said Witt is capable of playing shortstop and center field, which boosts his value.

“I think that he could be an elite defender really anywhere on the diamond,” Moore said. “We could put him in center field and he could cover Kauffman Stadium. Of course, we’ve got a terrific young shortstop in Adalberto Mondesi. But [Witt] definitely would be able to perform very well there. He’s just a special talent, and it’s been a joy watching him compete this spring.”

Witt is the son of former MLB pitcher Bobby Witt, who pitched 16 seasons in the major leagues.