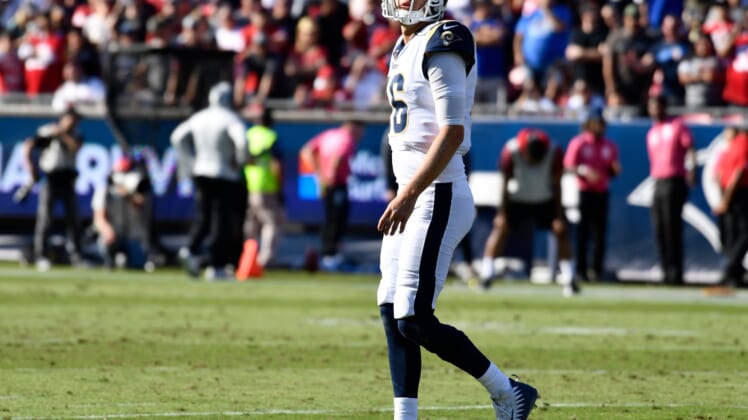 The 13 games played so far in NFL Week 6 were highlighted by a couple of epic offensive showdowns, some flawless masterpieces and a few rotten eggs.

We’re diving into the best and worst quarterback performances from the weekend’s action, starting with the man who led the Houston Texans over the Kansas City Chiefs.

How does a guy who threw two interceptions end up being featured as one of the best quarterbacks in Week 6? Two main reasons stand out. First of all, Watson bounced back and led the Texans to a road win against one of the best teams in the AFC. Secondly, he had three sure long touchdowns dropped by Will Fuller, and one of his picks was due, at least in part, to Fuller falling down en route to the end zone.

Watson had a tremendous overall game. He passed for 280 yards and a touchdown and did damage on the ground to the tune of 42 yards and two touchdowns.

He also is quickly establishing himself as one of the elite quarterbacks in this league while propelling Houston into the upper crust of the AFC.

Jameis Winston entered Week 6 on a hot streak, having thrown 10 touchdowns and just two interceptions in his last four games. On Sunday in London, he went to the dark place and turned the ball over an astonishing six times as the Bucs fell to their NFC South rival, 37-26.

As usual, Winston threw the ball a ton, completing 30-of-54 passes for 400 yards and a touchdown. But he also threw five interceptions, took seven sacks, fumbled twice and lost a fumble. The roller coaster continues, and fans are getting very upset about the bad games. At this point the Buccaneers have to be considering that Winston isn’t the right man to get this team on the winning track long term.

Kirk Cousins did something he doesn’t do very often on Sunday: He beat a team with a winning record. Perhaps motivated by the brutal commentary of his former teammate, Cousins shredded the Philadelphia Eagles’ secondary with a virtuoso performance.

For the second week in a row, Cousins was precise with his throws and decisive with his reads. He finished the game with 333 yards and four touchdowns on 22-of-29 passing, connecting with Stefon Diggs for three of those scores.

Daniel Jones had a miserable night going against the New England Patriots at Gillette Stadium Thursday evening. Completing less than half his passes (15-of-31), he managed just 5.2 yards per attempt while throwing three interceptions.

The rookie can take solace in the fact that this is a regular occurrence for first-year quarterbacks who go against a Bill Belichick-led Patriots team. And it’s also a positive development that he connected with veteran Golden Tate on a long touchdown, thanks to a perfect throw deep downfield.

The Baltimore Ravens won at home Sunday, thanks in large part to a monster game from Lamar Jackson against the Cincinnati Bengals. The second-year dual-threat gunslinger got busy early with a stunning 21-yard touchdown run, and that set the table for what was a legendary afternoon for the former Heisman winner.

Making huge plays all game with his arm and his legs, Jackson piled up 236 yards passing and added 152 yards on the ground. In the process, he made more NFL history — something that’s becoming a regular thing for him.

The Browns got off to such a promising start on Sunday at home against the Seattle Seahawks. They scored touchdowns on each of their first three drives, and Baker Mayfield looked confident for the first time in a while.

Unfortunately, things quickly spiraled down from there. Mayfield threw interceptions on two consecutive drives in the second quarter. He also was taken to the locker room at one point for medical treatment. Then, with a chance to win late in the fourth quarter, his third interception of the game sealed the loss.

Mayfield now has 11 interceptions on the season, and five in his last two games.

While Baker Mayfield was making mistakes that cost his team a win, Russell Wilson did the exact opposite for the Seahawks. Continuing a trend that’s been active all season long, Wilson took advantage of his opportunities to pass the ball and dangerous as a runner.

Leading the Seahawks to a four-point win, Wilson completed 23-of-33 passes for 295 yards with two touchdowns and no interceptions. Wilson also ran the ball nine times for 31 yards and a touchdown. On the season, he now has 17 total touchdowns and has been turned over just once on a lost fumble.

Already on thin ice playing out his fifth-year option, this former No. 2 overall pick finally got benched on Sunday. Before exiting in favor of Ryan Tannehill, Mariota led a Titans offense that was held scoreless, and his play had a lot to do with it.

The former Heisman winner was held to just 56 net passing yards (sacked three times for seven yards) on 7-of-18 attempts. Worse, he threw two interceptions and engineered an offensive attack that generated just six first downs, three of which were gained by penalties.

It would be impossible not to feature both of these quarterbacks, who had monster games for their respective teams. And since they dueled against one another in the most incredible offensive shootout of Week 6, we’re going to feature them together.

For the second week in a row, Arizona Cardinals rookie Kyler Murray was stellar. He completed 27-of-37 passes for 340 yards with three touchdowns and no interceptions.

He also added 32 yards on the ground scrambling away from pressure.

Matt Ryan, in a losing cause, was superb. He completed 30-of-36 passes for 356 yards with four touchdowns and no interceptions. If not for a missed extra point by veteran Matt Bryant late in the fourth quarter, he may have found a way to win the game in overtime.

The Rams lost their third game in a row Sunday as the San Francisco 49ers asserted their dominance with a major statement win on the road. Unlike the previous two losses, quarterback Jared Goff did not pile up the passing yards. In fact, he finished with a career-low 78 yards (56 net yards due to four sacks for 22 yards).

Goff was clearly out of sorts throughout the game. He was under pressure on almost every single passing down. He ended up completing just 13-of-24 passes, including just one pass over 10 yards, and missed badly on many of his attempts. He also fumbled twice and lost one of them. The Rams gained just one first down on a passing play. Even worse, they did not convert a single third-down or fourth-down attempt in 13 tries.