The Baltimore Ravens training camp is closing in and fans are pumped for a return to prominence for Lamar Jackson and the boys in 2022.

Last season, Baltimore finished with a sub .500 record for the first time since 2015 and ended up tied at the bottom of the AFC North with the Cleveland Browns. An unfamiliar place for a franchise that has had only two losing seasons since John Harbaugh took over in 2008.

However, with a couple of talented first-round picks in tow, and hopefully a healthy Jackson for all 17 games, the Ravens expect to be back in the hunt for the division title this season.

Related: Baltimore Ravens schedule – Predictions and analysis for the 2022 season

Let’s dive into Sportsnaut’s Baltimore Ravens training camp preview. As we examine everything you need to know from the camp’s location, schedule, and storylines to follow.

For an eleventh straight year, the Baltimore Ravens training camp will take place at the Ravens Under Armour Performance Center in Owings Mills, Maryland.

Training camp officially kicks on July 27 and will run through August 15. As many as 14 practices will be open to fans to attend in person. You can find the full rundown of open practice days and times below. 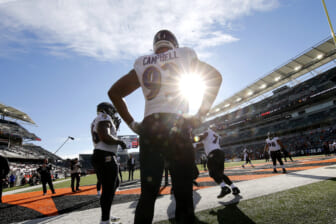 Can fans attend the Ravens training camp this year?

Yes, fans can go and check out the stars of their favorite football team in person this summer. All practices require a ticket that is free and can be found on the team’s website here. Availability begins on July 13. As many as 1,000 fans will be allowed to attend training camp practices in 2022.

Here are the top storylines to follow and position battles to watch during the Ravens training camp 2022.

The offensive line for Baltimore last season was very inconsistent. However, during the offseason, the team added veteran tackle Morgan Moses in free agency and took center Tyler Linderbaum with their second first-round pick in April. So the line, on paper, should be better this season. But left guard is still a question mark heading into the new season.

Ben Powers is the odds-on favorite to win the job but he will still battle it out with Ben Cleveland, Tyre Phillips, and even Patrick Mekari. While a good old-fashioned competitive battle isn’t a bad thing, the team would be better served with Powers being dominant and winning the role early so this revamped line can develop chemistry fast.

Watching the development of the top three draft picks

The Ravens made three selections in the first 45 picks of the 2022 NFL Draft. Linderbaum is likely to start but will need to earn his stripes with key developments in camp as the leader of the offensive line. However, many eyes will be on the 14th overall selection, Kyle Hamilton.

Hamilton and 45th pick David Ojabo will have a great deal of hope and expectation heaped on them to help bring the Ravens defense back to relevancy in 2022. Watching their growth as professionals will be a major story this summer.

Jackson’s contract situation has been the biggest story in Baltimore during the offseason. The five-year veteran is playing in the final season of his rookie deal and is set to make $23 million. Negotiations on a new deal haven’t gained much traction thus far. 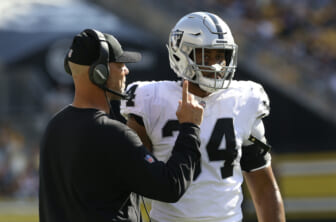 Jackson has played coy when asked about his contract status while the team hasn’t seemed too concerned about their franchise quarterback not being signed passed this season. It’s a topic that is sure to be asked about throughout the summer and the team must work to make sure it does not become a distraction.