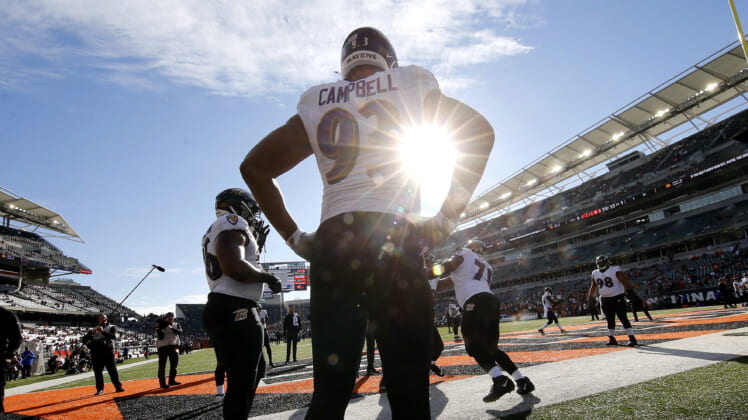 Baltimore Ravens defensive lineman Calais Campbell heads into the 2022 NFL season determined to give everything he has in an effort to win a Super Bowl. If the 35-year-old has his way, it could be the perfect end to an outstanding career.

Campbell entered the league as the 50th overall pick in the 2008 NFL Draft, selected by the Arizona Cardinals. Needless to say, his first season at the level went poorly with just one quarterback hit and zero sacks in 16 games.

Since that learning experience, the 6-foot-8 lineman has transformed himself into one of the best players at his position for more than a decade. Along the way, he became both one of the highest paid NFL players and one of its most respected.

A winner of the Bart Starr Award – given to the player who ‘best exemplifies character and leadership’ – and the Walter Payton NFL Man of the Year Award, which recognizes a player’s commitment to philanthropy and helping the community – Campbell has left a permanent mark on football.

Heading into his 15th NFL season with one of the best teams in the league, he recognizes that this is the opportunity of a lifetime. It also might be his final months suiting up with a team.

During an appearance on NFL Network’s Inside Training Camp Live, Campbell revealed that he is approaching the 2022 season as if it will be his last.

“I’m in a place right now where I’m just taking it this year. I know I’ve got this year in me. I don’t know if there’s anything left after that, but I’m going to leave it all on the field, empty the tank, and when it’s all said and done, after this year, I’ll reconvene in the offseason to see where I’m at. But right now, I’m preparing like this is my last year. So, I’m going to give it everything I have.”

Campbell has made an impact at every stop in his career. With the Cardinals (2008-’16), he became a two-time Pro Bowl selection. After signing a $60 million contract with the Jacksonville Jaguars, Campbell immediately delivered by earning a first-team All-Pro selection (2017).

Related: Everything to know about 2022 Pro Football Hall of Fame ceremony

He has also made a lasting impact on the city of Baltimore and Ravens teammates ever since joining the franchise in 2020.