Baker Mayfield viewed as ‘childish and immature’, divided the locker room in Cleveland 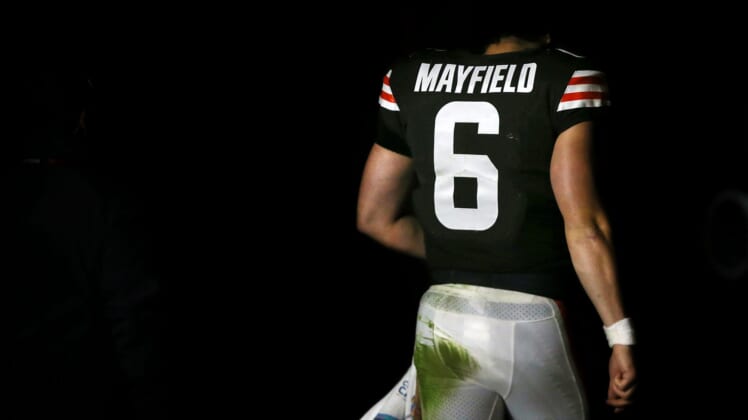 Well, the Cleveland Browns were finally able to move on from the Baker Mayfield era that lasted just four seasons. They ended up getting a playoff appearance out of the first overall pick from the 2018 NFL Draft, which is incredible considering the team he started with. On the other hand, many would agree that the Browns have had one of the most talented rosters in the past few years.

Either way, the Browns made the decision to move on from Mayfield long ago, based upon what they witnessed first-hand over the past few years. They had the option to extend Mayfield, they just weren’t interested. Or at least not at his preferred price.

That became official when they made the Deshaun Watson trade. But as usual once a team has decided to move on from an individual, whether it’s a player, coach, or even general manager, we’re now hearing more accounts of the dysfunction, of why the last regime just didn’t work.

Look, it doesn’t come as a shock to hear that Baker Mayfield might not be the best teammate out there. It’s not the first time we’ve heard such claims. Plus, his performance wasn’t up to par last season, throwing 17 touchdowns to 13 interceptions, which naturally leads to discontent.

Aside from all that, a recent report from Jason Lloyd of The Athletic shares several interesting tidbits from Mayfield’s tenure with the Browns.

Perhaps most notable was this:

Some of these traits aren’t hard to picture, based on what we’ve seen from Mayfield, dating even back to his Oklahoma days. But at the same time, I have a feeling if Mayfield and the Browns had more success, we’d never hear such accounts. No one’s ever going to be liked by everyone, so it’s natural for some ‘unnamed source’ to leak their personal feelings about the QB, but that doesn’t mean he’s doomed or anything.

Now with a fresh start coming into Carolina knowing that he has to prove his worth to his teammates and the locker room as a whole, I expect Mayfield to be on his best behavior. I don’t think we’ll hear the same reports after this season, but I could be wrong.

Either way, getting a potential starting QB who has some untapped upside for a fifth-round pick is worth the price of admission for the Panthers. I’m intrigued to see how it works out.