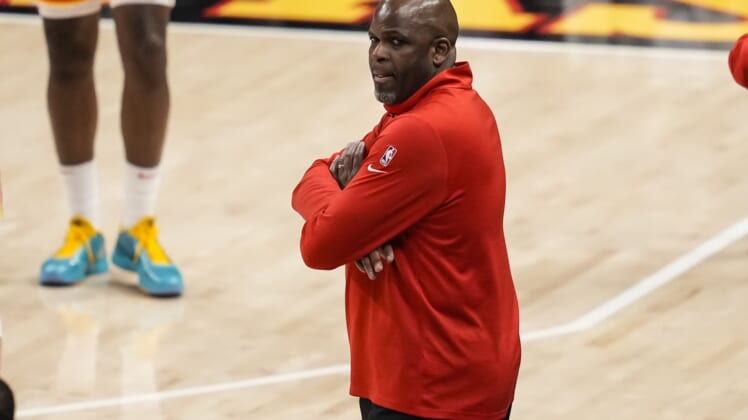 Jun 11, 2021; Atlanta, Georgia, USA; Atlanta Hawks interim head coach Nate McMillan shown on the court against the Philadelphia 76ers during the second half of game three in the second round of the 2021 NBA Playoffs. at State Farm Arena. Mandatory Credit: Dale Zanine-USA TODAY Sports

The Atlanta Hawks have reached an agreement with Nate McMillan to make him the team’s permanent coach, general manager Travis Schlenk said Monday.

The Hawks blossomed as a contender under McMillan’s leadership after he took over for fired coach Lloyd Pierce in March. The Hawks had been struggling to gel, starting 14-20 following an active offseason that surrounded star Trae Young with veterans like Danilo Gallinari, Solomon Hill and Bogdan Bogdanovic.

Under McMillan, the Hawks surged to 27-11, with a 10-8 mark in the playoffs. Atlanta defeated the New York Knicks and Philadelphia 76ers in the playoffs before falling to the Milwaukee Bucks in Game 6 of the Eastern Conference finals on Saturday.

Schlenk offered these thoughts on McMillan after the March 1 move: “I have a ton of respect for his humility that he has on the sideline and just his ability to create a sense of calm with the guys. … That’s one of the things he preaches is stay calm, stay calm.”