It would not be a major surprise if we saw some big NBA trades during the annual draft later this week. Some teams picking within the lottery are going to look to add proven pieces. There’s also an expectation of more trades this summer than in the past due to teams being up against the salary cap.

Below, we look at six blockbuster NBA trade scenarios that would make a ton of sense during the 2021 draft.

Lakers general manager Rob Pelinka might believe that it makes sense to keep their core together. With that said, it became clear during Los Angeles’ ugly first-round exit in the 2021 NBA Playoffs that it needs a better supporting cast behind LeBron James and Anthony Davis.

Without much to offer up as it relates to acquiring a true star player like Damian Lillard, the Lakers go with an underrated perimeter option in Hield. He’s capable of scoring 20 points on a consistent basis, hit on 39% of his threes last season and is an elite outside shooter.

Sacramento is moving off both Hield and Bagley III during the NBA offseason. That much is known. Acquiring Kyle Kuzma to team up with the star-studded backcourt of De’Aaron Fox and Tyrese Haliburton would be a win. The Kings could also potentially package the pick they acquire in this trade with their original first-round selection (ninth overall) to move up in the lottery.

Talk about a blockbuster NBA trade. Chicago Bulls general manager Marc Eversley made it clear ahead of the March trade deadline that they are in win-now mode by acquiring All-Star center Nikola Vucevic from the Orlando Magic. Now short on draft picks, Chicago finds another star to team up with the big man and fellow star Zach LaVine. In the process, the Bulls build what could very well be a top-end title contender in the Eastern Conference.

While Toronto might want draft picks if the team moves off Siakam and enters full-scale rebuild mode, acquiring two proven former lottery picks seems to make more sense. That’s especially true with the Raptors already boasting the No. 4 pick in the 2021 NBA Draft. White would move to the two-guard spot next to Fred VanVleet while Williams showed a ton of promise as a rookie after being selected No. 4 overall in the 2020 NBA Draft.

From Philadelphia’s perspective, this would be a no-brainer. Imagine Gilgeous-Alexander teaming up with Joel Embiid, Tobias Harris, Seth Curry and Andrew Wiggins. That would legitimately be a championship-caliber core group.

For some reason, there’s now talk that the Thunder might look to move Gilgeous-Alexander. Still only 23 years old, this doesn’t seem to make given that he can be that franchise cornerstone in a rebuild. Apparently, Sam Presti and Co. are targeting Cade Cunningham in a move up for the first pick. They even offered up Gilgeous-Alexander and the sixth selection to the Detroit Pistons, who reportedly turned down said offer.

If the Thunder do in fact move their star guard, it stands to reason that the Philadelphia 76ers would come calling. In this scenario, it comes in the form of a three-team trade that nets the Sixers two starters in the backcourt to team up with reigning NBA MVP finalist Joel Embiid. The cost? Ben Simmons and a stud youngster in Maxey.

From Oklahoma City’s perspective, it nabs a potential franchise cornerstone in Maxey as well as the third overall pick to take on Kevin Love’s bloated contract while sending Walker packing. A move of this ilk might actually enable OKC to entice the Pistons in another blockbuster trade. As for the Cavaliers, it’s becoming increasingly clear that they are in on Simmons. Moving off the third pick for the reigning NBA Defensive Player of the Year finalist would be a win-now move this team is seemingly looking to make.

Golden State has been among the teams most linked to Beal since rumors persisted that the All-Star guard is considering a trade request. In fact, the Warriors have been linked to him dating back to the NBA trade deadline back in March. It makes perfect sense for Golden State in that it has the assets to offer up and is in win-now mode with the core three of Stephen Curry, Klay Thompson and Draymond Green hitting the latter stages of their primes.

From Washington’s perspective, this might be the best offer it receives for Beal. Adding 2020 No. 2 pick James Wiseman as the centerpiece in this deal enables the Wizards to start anew with a franchise cornerstone. Wiggins is seen as vastly underrated on both ends of the court after a stellar first season with the Warriors. He’s also still only 26 years old. In addition to the picks, Washington also nets another former first-round selection in Jordan Poole who upped his game from the two-guard position as a sophomore last season. The Wizards also get out from under Bertans’ bloated contract after he struggled in his first season since being paid big time.

If Washington were to trade Beal, there’d be a chance that they would want to blow the whole thing up. Having already engaged in trade talks with the Los Angeles Lakers involving Westbrook, Washington keeps its attention focused on Southern California here. In the process, it adds a solid young wing in Mann and three veterans who could bring back nice returns in separate trades. Add in two first-round picks, and this would be a coup for Washington. 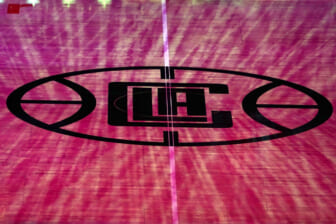 As for the Clippers, it’s becoming readily apparent that they are looking for an upgrade at point guard. Westbrook would obviously provide that over the likes of Beverley and Rajon Rondo. Los Angeles also has to look at adding another top-end player to stay afloat until Kawhi Leonard returns from his partially torn ACL. While it’s no longer a foregone conclusion that Leonard will remain with the Clippers this summer, this hypothetical Westbrook blockbuster is working under that premise.

Oh boy. Talk about a blockbuster NBA trade to end blockbuster NBA trades. The Knicks are now favored to land Dame if the Portland Trail Blazers are forced to trade him. Coming off a surprisingly successful 2020-21 season, these Knicks are also now suddenly a prime landing spot for big-name players. Boasting a ton of assets to make a move of this ilk, Lillard to the Big Apple makes sense.

The idea would be to team him up with with Julius Randle to form a elite duo. New York would also have enough cap room to add a max-contract type player on the NBA free agent market. The interesting dynamic here is that it would likely come in 2022 with roughly 10 future Hall of Fame players potentially set to hit the open market.

For Portland, this would be all about starting anew with a rebuild. If the team is forced to trade Lillard, it also would likely move off C.J. McCollum. If so, acquiring three potential core players and five future first-round picks would help expedite said rebuild.