LeBron James and the Los Angeles Lakers were knocked out of the NBA Playoffs, ending their title hopes in the first round and beginning the NBA offseason far earlier than expected. In what will be the most critical summer for the franchise in years, Lakers rumors will be flying around this offseason.

Anthony Davis and LeBron will be back with the team next season and there’s reason to be optimistic that both stars will be far healthier than we saw in Game 6. But it’s evident that durability will be a problem for Davis throughout his career and James no longer can carry a team like he used to after 18 NBA seasons.

If Los Angeles wants to rebound next season, Rob Pelinka needs to make significant changes in the summer. Let’s dive into the latest Lakers rumors. 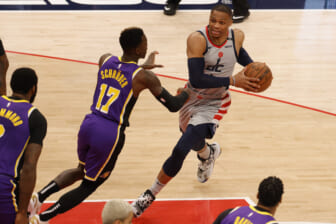 As Los Angeles explores options for filling outs its roster on a minimum contract, another former Lakers’ player has emerged as an option. According to NBA insider Marc Stein, the Lakers have considered signing guard Isaiah Thomas.

Thomas, a two-time All-Star (2016, ’17), played for the Lakers in 2018. He also has a history playing alongside LeBron James, but their brief tenure together in Cleveland didn’t end particularly well. Thomas played three games for the New Orleans Pelicans last season, averaging 7.7 points per game. Ultimately, it would be a surprise if Thomas signs with Los Angeles.

After losing out on Patty Mills, Los Angeles responded quickly with two of its own big moves. Within the span of a few minutes, the Lakers signed guard Malik Monk and forward Carmelo Anthony.

Anthony provides depth at forward, some perimeter shooting and is a trusted veteran who has a great relationship with LeBron. As for Monk, the No. 11 pick in the 2017 NBA Draft, shot 40.1% from beyond the arc this past season. The 23-year-old will also easily be one of the youngest players on the roster. 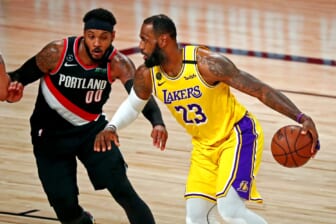 After Kent Bazemore signed a one-year contract with Los Angeles, his agent told The Athletic’s Shams Charania that a more lucrative offer from the Golden State Warriors was rejected. Bazemore, who shot 40.8% from the perimeter last season, was reportedly promised a larger role in Los Angeles and believes they offer the ebst shot at competing for a championship. 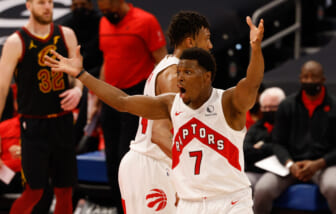 According to Brad Turner of the Los Angeles Times, Carmelo Anthony and Dwight Howard are interested in joining the Lakers. It’s not a huge surprise that either player wants to sign with Los Angeles, considering Howard’s two stints with the team and Anthony’s desire to be teammates with LeBron James.

Both players would likely need to settle for the veteran’s minimum, taking less than they might find in NBA free agency to compete for a championship in Los Angeles. Given Anthony’s success last season from beyond the arc (40.9% shooter) and Howard’s defense around the rim, both would fill needs on the Lakers’ roster. 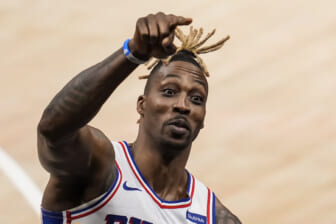 The Los Angeles Lakers chose poorly when opting for Russell Westbrook over Buddy Hield. But with the trade not finalized, ESPN’s Zach Lower wrote that there is still an outside shot at acquiring one of the best perimeter shooters in NBA history. Unfortunately for Los Angeles, the Wizards and Sacramento Kings don’t want Dennis Schroder. More on the situation can be found below. 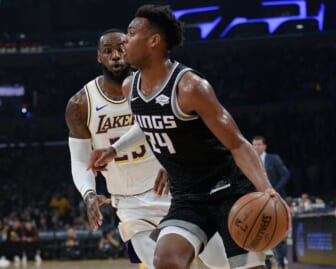 In an in-depth piece on the trade, Brad Turner of the Los Angeles Times shared how Russell Westbrook, LeBron James and Anthony Davis orchestrated the idea for the blockbuster trade. Among the nuggets from the story, LeBron and Davis offering to switch positions.

LeBron offering to play power forward is notable for spacing reason, but the big rumor is Davis suggesting he could shift to center. It’s a position the All-Star has been very reluctant to play in recent years, but it seems Davis is open to the idea with Westbrook joining the team.

There are still huge concerns about spacing and the Lakers’ lack of perimeter shooting, but this deal makes a little more sense if Davis switches to center.

The Ringer’s Kevin O’Connor reports that the Lakers increased their offer to Sacramento to secure shooting guard Buddy Hield. After previously offering a deal centered around Kyle Kuzma or the 22nd pick in the NBA Draft, Los Angeles is reportedly now willing to package both with KCP or Montrezl Harrell. Hield, one of the best perimeter shooters in the NBA, would fill an obvious need for the Lakers.

One of the Lakers’ biggest needs this offseason is perimeter shooting. While there are high-end options available who could play regular minutes, Los Angeles is among the teams interested in a rotational player.

According to the New York Post’s Marc Berman, the Lakers are among the teams interested in Reggie Bullock. He would provide excellent perimeter shooting (41% this past season) and could provide solid defense along the wing.

While there will be plenty of competition, including from the Philadelphia 76ers and Boston Celtics, Los Angeles might offer him the best shot at winning an NBA title. If he can fit financially, Bullock would be a nice addition for the Lakers. 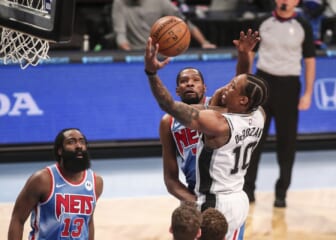 The Los Angeles Lakers have lost their first player of the 2021 NBA offseason. Kostas Antetokounmpo, who played in 15 games this past season, is leaving the NBA. Antetokounmpo, the younger brother of Giannis, is signing a multi-year deal with Olympiacos.

Antetokounmpo rarely saw minutes in the Lakers’ rotation, even with the team dealing with a variety of injuries this past season. He averaged just 0.8 points per game, committing nearly as many turnovers (11) as points scored (12).

Los Angeles might have beaten the Suns if not for Davis’ groin injury in the first round. Seeing Chris Paul and Co. go on to sweep the Denver Nuggets just made it more evident that injuries kept the Lakers from another title run. While the 2021-’22 season is months away, Davis is already feeling confident.

Getting the healthiest versions of James and Davis is what really matters for the Lakers this offseason, this team stands no chance of winning in the playoffs without them. Things are headed in the right direction and a normal offseason will help, but they also need the Lakers’ front office to provide greater support.

Rob Pelinka did an excellent job building a championship roster, but many of his moves this year didn’t work out. Montrezl Harrell combined for just 25 total minutes in the final three games against Phoenix, never playing in a victory and Andre Drummond didn’t leave the bench in Game 6.

With so much work to be done this summer and a majority of the roster eligible for free agency, Pelinka outlined how the Lakers will approach the offseason.

“I’m convinced that, again, without some of the unforeseen circumstances this year, the challenges that we had to face, that we’d be a championship-caliber team. So the goal is to try to keep that core group together.”

Schroder, Matthews, Caruso, Drummond and Marc Gasol have each expressed interest in returning. While Los Angeles would like for each of them to return, it isn’t an affordable option.

Pelinka was asked specifically about Caruso and Talen Horton-Tucker. Both were drafted and developed by the Lakers and should be priorities this summer. But even with Bird rights, it’s realistic that only Horton-Tucker returns.

Pelinka didn’t regret adding Drummond during the season and the club is interested in retaining him. While he’ll likely find a better market than Hassan Whiteside did last offseason, the All-Star center may struggle to find really lucrative offers.

As for Schroder, whose on-court play reportedly frustrated the Lakers, his value to Los Angeles might only be the potential return in a sign-and-trade.

The NBA world was buzzing last offseason when the Los Angeles Lakers acquired Dennis Schroder. He was supposed to provide playmaking and athleticism, taking some pressure off LeBron. Los Angeles was so confident about his potential impact, it offered him an $84 million extension but he wanted more.

Schroder is now coming off an atrocious performance in the NBA Playoffs, which will likely cost him millions. When he missed all nine of his shots in Game 5, he became the first Lakers’ player to not score on nine-plus attempts in a playoff game since the franchise moved to Los Angeles.

There will still be a market for the 27-year-old guard. He was a Sixth Man of the Year candidate with the Oklahoma City Thunder in 2019, averaging 18.9 points per game. A sign-and-trade is the most logical path for the Lakers to bring in more talent and it will be a big storyline to follow this offseason.

NBA rumors about Chris Paul opting out of his contract created plenty of buzz. The future Hall of Famer is close friends with LeBron and has a home in Los Angeles. But the Lakers have enough limitations financially this summer, with many key rotation players hitting the open market and the luxury tax line still a problem.

Assuming Paul is out of the Lakers’ price range and Kawhi Leonard re-signs with the Los Angeles Clippers, there are a few other options.

We can’t emphasize enough the need for the Lakers to add more trusted shooters on the perimeter. It’s exactly what the front office needs to find in free agency, even working with a limited budget. There will be multiple suitors for Reggie Bullock, but he does fit what this team needs.

Bullock is a career 39.2% shooter from 3-point range in his career and he took that to another level this past season with the New York Knicks. The 6-foot-6 forward averaged 2.5 3-pointers made per game, hitting 41% of his shots from deep. Put him on the floor with defensive attention on LeBron and Davis, Bullock will hit the open shot.

What moves do you think the Los Angeles Lakers need to make? Let us know below.