With the 2021 NBA Draft less than a week away, Washington Wizards superstar Bradley Beal is reportedly mulling a trade request before Thursday’s event at Barclays Center in Brooklyn.

Bleacher Report’s Jake Fischer reported Saturday that a source close to Beal “confirmed the situation is now fluid” regarding his desire to play elsewhere.

Beal has been adamant about his dedication to the Wizards before. Even when they were struggling throughout the 2020-21 campaign, he refused to cave when pressed about a potential trade.

Instead of demanding a move then, Beal stuck it out in the nation’s capital. He and Russell Westbrook wound up rallying Washington into the playoffs, but they couldn’t do enough to avoid a first-round exit versus the Philadelphia 76ers. 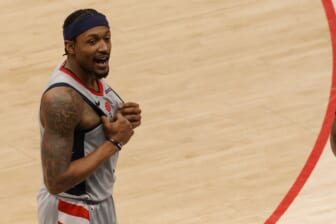 With Scott Brooks out as head coach and Wes Unseld Jr. in, it’s a new era for Wizards basketball. Brooks and Westbrook are particularly close, so the latter may seek to go elsewhere. This leaves Beal with a potential out from Washington, too.

The Golden State Warriors are reportedly very interested in Beal. They’re hoping to maximize their championship window while Stephen Curry, Klay Thompson and Draymond Green are in their primes.

This news regarding Beal seems to align with Golden State as a potential destination, because the Warriors have the seventh and 14th overall picks in the draft to float in a trade proposal. They’d have to throw more in to acquire Beal, such as James Wiseman, but Golden State holds the assets to at least start a conversation.

Other big-market teams who might try to take a shot at a blockbuster Beal deal include the New York Knicks, Boston Celtics and Los Angeles Lakers.

Other franchises near the top of the draft order can’t be ruled out either. It’s just a matter of what Washington would be looking for in a hypothetical trade.