Bradley Beal trade ‘atop’ Golden State Warriors wishlist, how it could work

Beal, age 28, has long been the subject of NBA trade rumors. The Washington Wizards refused to trade him this past season and the All-Star guard has remained loyal to the franchise. But with a new coach and an uncertain future for this team, it might not be long before Beal demands a trade.

If that moment comes, Golden State is prepared. According to The Athletic’s Marcus Thompson II, Beal is atop the Warriors’ offseason wishlist. Not only is he coveted by the front office, Stephen Curry, Klay Thompson and Draymond Green are all encouraging management to pursue a Beal trade. 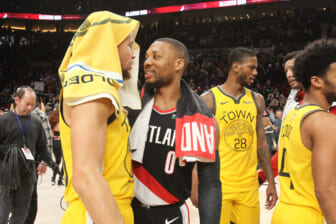 While Beal reaffirmed his commitment to the Wizards in February, circumstances change quickly. Washington isn’t close to competing for a championship and the All-Star guard covets a title. With more NBA stars pursuing better opportunities, he could be next.

Only a few NBA teams have the resources to acquire Beal. Not only does it require financial flexibility, but Washington would also set an absurd asking price to move its perennial All-Star guard. That’s where the Warriors fit in nicely to this equation.

Wiggins is no longer just a salary match in a big trade. While the 26-year-old forward would help balance the cap sheets, he offers actual value for Washington. Wiggins made tremendous strides defensively this past season, finishing with a career-best 2.7 Defensive Win Shares.

The Wizards could give him a more prominent role for the 2021-’22 NBA season, using it to determine if he can be a part of their future core. If he takes a step back, Wiggins’ $33.61 million expiring contract will be a trade chip during the 2022-’23 season.

James Wiseman is the centerpiece of this trade. The No. 2 pick in the 2020 NBA Draft, Golden State greatly underestimated Wiseman’s NBA readiness this past season. But this is still a 7-foot center with outstanding athleticism and the potential to be an All-Star at his peak.

Keep in mind, it takes longer for bigs to develop in the NBA. Phoenix Suns center Deandre Ayton took off in his third season after many suggested he was a draft bust. It’s also important to note that new head coach Wes Unseld Jr. is credited with helping Nikola Jokic develop from a second-round pick into the 2021 NBA MVP. 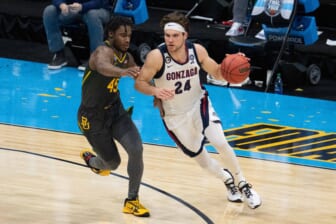 As our latest 2021 NBA mock draft shows, the Wizards could find compelling talent with both first-round picks acquired from the Golden State Warriors. A talented prospect like Jonathan Kuminga or Keon Johnson will be available at No. 7 and there are several high-upside targets later in the lottery.

Meanwhile, this is the exact kind of move the Warriors have saved their assets for. Beal would provide Golden State with an outstanding shooter and he can also create for Curry and Thompson. Plus, there’s still some defensive upside with him if he is on a championship-caliber team.

The Golden State Warriors should exercise some patience, waiting to see which NBA star demands a trade. But when an opportunity presents itself, expect this team to strike in pursuit of another NBA title.