ESPN insider Adrian Wojnarowski reported the news of Unseld’s hiring on Saturday, and the previous day, highlighted how significant the coach’s family history is to the franchise:

While the merits of Unseld’s father as a player are obvious — he was a five-time All-Star who was the 1978 NBA Finals MVP who also coached the team from 1987 through 1994 — the junior Unseld is set to carve out his own unique mark in the nation’s capital.

After getting his start as an assistant with the Wizards in 2005, Unseld is having a full-circle coaching career moment. His first stint with Washington lasted until 2008, as Unseld then went to the Golden State Warriors for the 2011-12 season, and followed that with time on the Orlando Magic bench (2012-15).

Working on Michael Malone’s staff in Denver, Unseld witnessed one of the NBA’s premier player development programs in action, as the Nuggets had a surprise trip to the Western Conference Finals in 2020, and produced a league MVP in Nikola Jokic.

While it had to be difficult to turn down a return to Denver — considering the core of Jokic, Jamal Murray, Michael Porter Jr. and Aaron Gordon could very well be championship-ready — this homecoming of sorts is probably the best situation Unseld could’ve imagined. 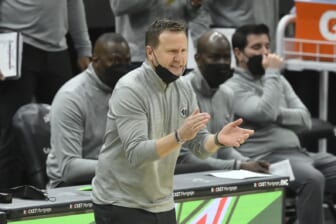 How Washington Wizards can build a winner under Wes Unseld Jr.

In a lengthy post from last month by ESPN.com’s Kevin Arnovitz, Unseld was described as follows: “A cerebral, meticulous coach whose profile on the Denver bench has broadened each season, Unseld finished as a strong runner-up in Chicago last offseason.”

Hopefully, as Unseld continues to fill out his coaching staff, he can carry over at least some of the staff from the Nuggets, because there’s hardly a team that’s done better building a roster from the ground up in recent memory.

Beyond the player development aspect that makes him an appealing hire, though, Unseld obviously has a great understanding of the game. It’s a matter of whether or not he can connect well with the Wizards’ incumbent superstars in Russell Westbrook and Bradley Beal.

Thanks to a late-season surge, Washington managed to sneak into the 2021 NBA playoffs. Westbrook and Beal present one of the most talented backcourts in the NBA, and Rui Hachimura is among the young Wizards players who have shown promise.

Maybe that’s the core Unseld builds around, or perhaps a blockbuster trade is in the offing. In any event, it’ll be fascinating to see how Unseld handles the legacy that precedes him and whether he can actually turn around a somewhat floundering organization.