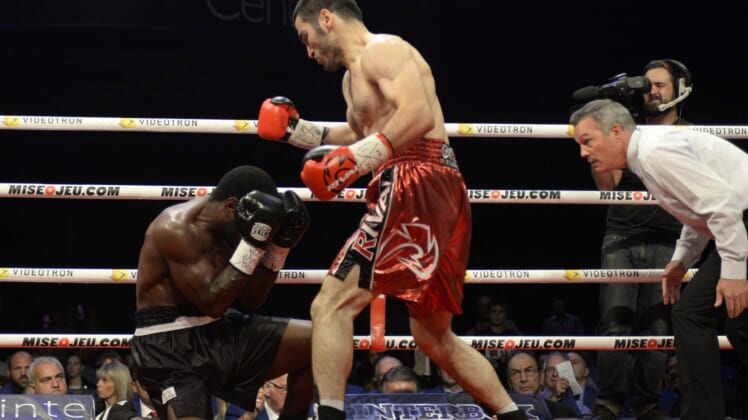 After 17 months out of the boxing ring, Artur Beterbiev made a triumphant return successfully defending his WBC and IBF Light Heavyweight titles in a 10th round TKO victory over Adam Deines. This improved his professional record to 16-0 with all 16 of his wins coming by knockout or stoppage.

This was Beterbiev’s fourth defense of his IBF belt and his second of his WBC belt. Coming into the fight, Beterbiev won all 15 of his professional fight by way of knockout or stoppage with only three of his fights going past the sixth round.

Beterbiev won the IBF Light Heavyweight title in November 2017, when he beat Enrico Koelling by knockout in the final round of the fight to claim the vacant belt. The fight was originally a title eliminator but was changed to a world title fight when former champion Andre Ward announced his retirement.

He went on to successfully defend the belt against previously undefeated Callum Johnson and Radivoje Kalajdzic. In October 2019, in his most recent bout, Beterbiev unified the IBF belt with the WBC belt when he beat former undefeated champion Oleksandr Gvozdyk by 10th round TKO.

This was the first world title fight in the professional career of Adam Deines. Turning pro in 2015, Deines is 3-1 when he faces opponents with an unbeaten record going into their fight. This, however, will be his first fight against an opponent that has challenged for or won a world title in their career.

In the first round of the fight, Adam Deines was having a solid round doing his best to maintain distance and staying mobile in an effort to neutralize Beterbiev’s offense as much as possible. However, Beterbiev was still able to land solid punches through the Deines’ guard that concluded with him scoring a knockdown toward the end of the round. Deines was able to beat the count and make it out of the round.

The second round was more of the same with Deines continuing to move around the ring and along the ropes. He would come in to throw a combination and move back out continuing with his gameplan looking to frustrate the champion. It was in the third round that Beterbiev looked to be more comfortable figuring out Deines’ movement and landing solid punches. Deines did his best to return fire when he could but was largely unsuccessful with Beterbiev using head and body movement to avoid his punches.

In the fifth and sixth rounds, Beterbiev began to assert his dominance confining the challenger to the corners and landing effective combinations. However, Deines continued to fight back landing clean shots in return but was not doing enough to keep his opponent at bay. The next three rounds saw Deines in survival mode moving around and returning shots just looking to avoid the oncoming attack from Beterbiev and get out of the round.

It was in the 10th round that Beterbiev sent Deines back down to the canvas with a swift left hook to the chin. While Deines was looking to get up to continue fighting, his corner threw in the towel ending the fight. Artur Beterbiev remains the only world champion in boxing today that has a 100% knockout percentage.