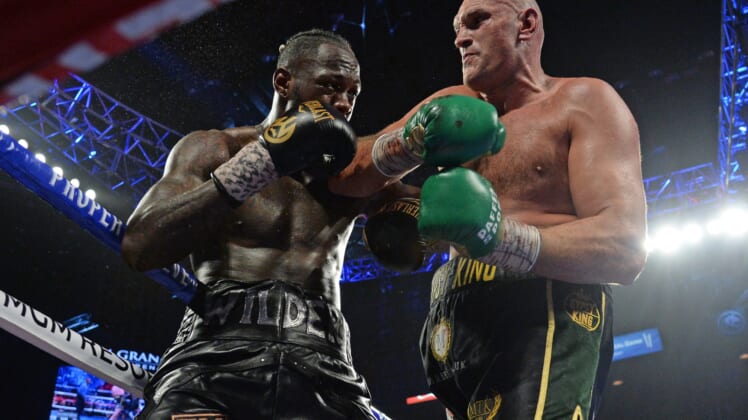 Boxing’s heavyweight division is home to the biggest, baddest men the sport has to offer. Every fight between heavyweights is sure to produce a fire fight that has the potential to end with a spectacular, highlight reel knockout.

While the heavyweight division is filled with talent from top to bottom, it could also be seen as top heavy seeing as many active fighters have been taken down by the heads of the division. Still, that does not take away from the fact that there may not be as deep of a division in the sport of boxing than the heavyweights.

Here are the 10 best heavyweight boxers in the world today.

Luis Ortiz has been a model of consistency in the heavyweight division turning away competitors put in his way. His best win so far came against former heavyweight contender Bryant Jennings. It’s just unfortunate that the only two losses on Ortiz’s resume were the two biggest fights of his career and were both to Deontay Wilder.

Ortiz was competitive in both fights and could have potentially won had it gone to the scorecards but it was not to be. In the first fight, Ortiz gave Wilder his most hotly contested fight of his career with the fight close on the scorecards going into the 10th round. However, Wilder overwhelmed Ortiz with an abundance of punches ending with an uppercut that sent him down leading to the referee waving off the fight without administering a count.

The second fight was much more definitive for Ortiz leading on all three judges cards going into the seventh round. This time around, it was a straight right hand from Wilder than dropped Ortiz and he was out for the count. Despite this, Ortiz is due another big opportunity and it would not be surprising if he was able to take advantage.

Like Luis Ortiz, the only two losses of Joseph Parker’s career (Anthony Joshua and Dillian Whyte) were in the two biggest fights of his career. However, there are two factors that separates him from Ortiz: A world championship run and better quality wins.

Parker reigned as WBO Heavyweight champion winning the then vacant belt against Andy Ruiz Jr. via majority decision handing him the first loss of his career. He successfully defended the belt twice including against Hughie Fury another opponent that was undefeated prior to the bout.

Since his loss to Dillian Whyte, Parker has won each of his last three fights in his bid to regain a piece of the heavyweight championship. His quest continues February 27th when he faces undefeated fighter Junior Fa.

Oleksandr Usyk joined the heavyweight division in 2019 after dominating the cruiserweight division for five years. In just his 10th professional fight, Usyk won his first world title beating Krzysztof Glowacki for the WBO Cruiserweight title. After unifying with the WBC belt after beating Mairis Briedis in January 2018, he became undisputed champion when he beat Murat Gassiev in July of that same year.

Upon successfully defending his titles against Tony Bellew, Usyk made the decision to move up to the heavyweight division. His heavyweight debut saw him score a 7th-round TKO win against Chazz Witherspoon, and he was victorious in his last bout, beating Dereck Chisora by unanimous decision.

British boxing phenom Joe Joyce has spent the least amount of time in the professional ranks than any fighter on this list. He turned pro in 2017 after a storied amateur career that included winning the silver medal in the 2016 Summer Olympics.

Through nine rounds, the fight was close with either man subject to a close decision loss should the fight have gone the distance. Joyce made sure that didn’t happen, knocking out Dubois in the first minute of the 10th round.

Dillian Whyte infamously rose to prominence by suffering his first professional loss to British rival Anthony Joshua by spectacular seventh-round KO. This was Whyte’s only world title bout to date in his professional career.

Since then, Whyte has dusted himself off well increasing his stance in the heavyweight division with high-profile wins against Dereck Chisora (twice), Robert Helenius, Lucas Browne, Joseph Parker and Oscar Rivas. Whyte suffered a minor setback in his most recent outing losing to Alexander Povetkin via 5th-round KO. However, he will get his chance at revenge against Povetkin when he faces him in a rematch on March 6th.

Andy Ruiz Jr. is a representation of what happens when you take full advantage of the opportunities given. In his career, Ruiz has only fought two former world champions with his first coming in a majority decision loss to Joseph Parker in a battle for the WBO Heavyweight title. It did not seem like Ruiz would be granted another world title shot any time soon.

In June 2019, Ruiz was granted a shot at becoming undisputed world champion against Anthony Joshua. This came in the aftermath of Joshua’s original opponent Jarrell Miller failing a drug test. Ruiz came into the fight as a massive underdog with the biggest selling point of the fight being that this was Anthony Joshua’s first professional fight in the United States. Ruiz spoiled Joshua’s US debut with a shocking seventh-round TKO win to become the new undisputed heavyweight champion.

While Alexander Povetkin is the only fighter in the top five to never hold a world championship losing world title shots against Wladimir Klitschko and Anthony Joshua respectively, he makes up for this with a resume of quality wins. From 2011 to 2013, Povetkin held the WBA interim Heavyweight title winning Ruslan Chagaev and successfully defending it four times including against former world champion Hasim Rahman.

Povetkin also holds wins against Carlos Takam, Mariusz Wach, and Hughie Fury. His most recent match saw him notch arguably the most impressive win of his career. On August 2020, Alexander Povetkin beat Dillian Whyte via fifth-round TKO in a fight that saw him show great resilience. Povetkin got dropped twice in the fourth round of the fight only to get off the canvas, finish the round, and knock out Whyte in the first 30 seconds of the next round.

An argument could be made that Deontay Wilder is the most powerful fighter the sport of boxing has ever seen. All but one of his victories has been by knockout and every opponent he has ever faced has touched the canvas. Wilder became world champion in 2015 when he beat Bermane Stiverne for the WBC Heavyweight championship in his only career win to go the full distance. He successfully defended the title nine times winning each fight by knockout.

Wilder holds wins against Eric Molina, Chris Arreola, Bermane Stiverne (rematch) and Luis Ortiz (twice). In the midst of those title defenses was a showdown against Tyson Fury that ended in a controversial, split-decision draw.

Although the fight was ruled a tie, many thought Fury deserved to be awarded the decision and that he outboxed Wilder for the majority of the fight. Wilder would have a rematch with Fury on February 2020 in which he would not only lose his title but also suffer his first professional loss with the duel ending in a seventh-round TKO triumph for Fury.

Prior to 2019, there would be no question about Anthony Joshua being the number one heavyweight boxer in the world. Anthony Joshua reigned as undisputed heavyweight champion with notable wins coming against Dillian Whyte, Charles Martin, Wladimir Klitschko, Joseph Parker and Alexander Povetkin.

However, a June 2019 title defense against last minute replacement Andy Ruiz Jr. changed the overall trajectory of Joshua’s career. There, Joshua was dethroned as undisputed champion losing to Ruiz via 7th round TKO giving him his first (and to date only) loss of his professional career.

Jousha would bounce back winning a rematch against Andy Ruiz Jr. via unanimous decision to reclaim his championship belts. His latest performance saw him successfully defend his titles against Kubrat Pulev in a 9th round KO victory.

Read More: Best boxing bouts that must happen in 2021

Tyson Fury has one of the greatest success stories in boxing today. In 2015, he became the undisputed heavyweight champion when he defeated Wladimir Klitschko by unanimous decision. Unfortunately, he was forced to put his boxing career on hold due to struggles with depression as well as alcoholism and drug abuse.

Over two years later, Fury returned to the ring and picked up right where he left off picking up two wins on his way to challenging Deontay Wilder for the WBC Heavyweight championship with the clash ending in a draw. He would get his rematch with Deontay Wilder in February 2020 after ending the undefeated streaks of Tom Schwarz and Otto Wallin in prior bouts.

This time around, Fury finished Wilder with a 7th-round TKO win handing the former champion his first professional loss. Fury dominated the fight from start to finish dropping Wilder twice and battering him with shots in every round.