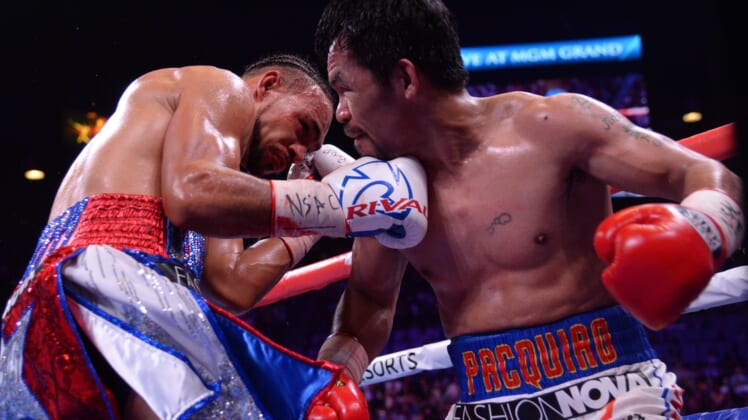 Welterweight Boxing Rankings: Boxing’s welterweight division is home to some of the greatest pound-for-pound fighters boxing has ever seen. Names including Floyd Mayweather, “Sugar” Ray Robinson, “Sugar” Ray Leonard, Felix Trinidad and Miguel Cotto took the sport to new fights with their amazing talent and entertaining bouts in the division.

The welterweight division continues to captivate the sport of boxing with matchups almost always being Fight of the Year candidates. Let’s dive into our top-10 welterweight boxing rankings today.

Of the fighters on this list, Vergil Ortiz Jr. is the only one that has yet to hold a world championship in his career. Ortiz is arguably the best prospect pound-for-pound in boxing today. He has won all 16 of his fights by knockout, with only two going past the sixth round. His most recent bout saw him take a seventh-round knockout win against Samuel Vargas, whose resume includes some top welterweights. With his career trajectory, Vergil Ortiz Jr. could be well on his way to challenging for a world championship by the end of this year. Ortiz took his first step to becoming a contender in March 20th, when he defeated former WBO Super Lightweight champion Maurice Hooker his first career win over a former world champion.

Then, in September 2016, he decided to move up two weight classes to challenge then undefeated WBC, IBF and WBO Middleweight champion Gennadiy Golovkin. He went on to lose in the fifth round, sustaining a fractured right eye due to the fight. He then lost his IBF championship to Errol Spence Jr. in an 11th-round TKO loss. His most recent bout saw him unsuccessfully challenge for the WBO Welterweight championship losing to Terence Crawford via sixth-round KO.

Danny Garcia joined the welterweight division in 2014 after reigning as WBC and WBA champion in the super lightweight division for two years. His run at welterweight started hot, winning three straight fights on his way to gaining his first title shot in the division. He won the vacant WBC Welterweight Championship (a title held by Floyd Mayweather Jr. prior to retiring from the sport) against Robert Guerrero in 2016.

However, he would lose the title in a unification bout against Keith Thurman with the WBA Welterweight championship also on the line. Including his losses to Shawn Porter and his most recent loss to Errol Spence Jr., Garcia is 1-3 in world title fights at welterweight. Despite this, Garcia has an impressive resume of wins at welterweight, including Lamont Peterson, Paul Malignaggi, and Samuel Vargas.

Yordenis Ugas currently holds the WBA Welterweight championship, winning the belt in his most recent bout against Abel Ramos via a split decision. Though he is a world champion, he is outside of our top-five welterweight boxing rankings because his resume does not equal up to his competition in the division. In 30 fights, Ugas has just one fight against a former world champion (Shawn Porter), which he lost by split decision though it is seen as controversial. Ugas has a chance to improve his resume with a rumored unification bout against Errol Spence Jr. thrown around in the rumor mill for this year.

Shawn Porter’s professional career began in the super middleweight division in 2008. He would gradually work his way down the weight class ladder before settling in at the welterweight division. After three years as a welterweight, Porter finally got his first world title shot when he challenged Devon Alexander for the IBF Welterweight championship. He would successfully win the belt after securing a unanimous decision victory. However, he would lose the belt to Kell Brook after only one successful title defense against Paul Malignaggi.

After losing another world title shot, this time against Keith Thurman, Porter won the WBC Welterweight title against Danny Garcia. Once again, after a successful title defense, Porter would lose the WBC belt against Errol Spence Jr. in a unification bout. Porter’s notable wins at welterweight include Adrien Broner, Andre Berto and Yordenis Ugas.

Although he has not been in the ring since suffering his first professional loss to Manny Pacquiao in July 2019, Keith Thurman’s catalog at the welterweight division can not be denied. Before losing to Pacquiao, Keith Thurman held the WBA Welterweight championship after earning it in March 2015 via unanimous decision victory against Robert Guerrero.

After successfully defending the title against Luis Collazo and Shawn Porter, Thurman then unified the WBA and WBC Welterweight titles after defeating Danny Garcia via split decision. Thurman is eying a return to the ring this year, hoping to take two fights.

Welterweight Boxing Rankings: Who is the best welterweight boxer today?

Manny Pacquiao is arguably the greatest pound-for-pound fighter the sport of boxing has ever seen. He has won world championships in a record eight weight classes: flyweight, super bantamweight, featherweight, super featherweight, lightweight, super lightweight, welterweight and super welterweight. Pacquiao won his first world championship at welterweight in 2009 when he beat Miguel Cotto for the WBO Welterweight title via 12th round TKO. He successfully defended the belt against Shane Mosley and Juan Manuel Marquez before losing it in a controversial loss to Timothy Bradley.

However, he would regain the belt in a rematch with Bradley before losing it to Floyd Mayweather. Pacquiao most recently held the WBA Welterweight championship, winning it against Lucas Martin Matthyse and successfully defending against Adrien Broner and in his most recent fight against previously undefeated Keith Thurman. After a two-year layoff, Pacquiao is set to return to the ring when he faces unified IBF and WBC Welterweight champion Errol Spence Jr.

Unfortunately for Terence Crawford, he has not had the chance to prove he could beat top welterweights seeing as almost all of them are signed with PBC on Fox while he is signed with Top Rank. Still, he has been dominant since turning to the professional ranks in 2008. Crawford previously held world championships in the lightweight and super lightweight division (famously held world titles from all governing bodies at super lightweight) before joining the welterweight division. His welterweight debut saw him win the WBO Welterweight championship via ninth-round TKO against Jeff Horn. He has successfully defended the title four times, ending two unbeaten runs along the way (Jose Benavidez Jr. and Egidijus Kavaliauskas).

Errol Spence Jr.’s impressive resume of recent fights is the main reason he is No. 1 in our welterweight boxing rankings. Currently reigning as IBF and WBC Welterweight champion, Spence won and has successfully defended his titles against four of the fighters on this list: Kell Brook, Mikey Garcia, Shawn Porter and Danny Garcia.

He also holds wins against Samuel Vargas, Chris Algieri, Carlos Ocampo and Lamont Peterson. Since April 2015, Spence has fought 12 opponents with 20-plus wins and fewer than four losses. Boxing fans have clamored for a dream fight between Spence and Crawford, however, both fighters have made it clear that the bout is on either man’s radar. As for now, Spence will have arguably the biggest test of his career when he faces Manny Pacquiao in August.