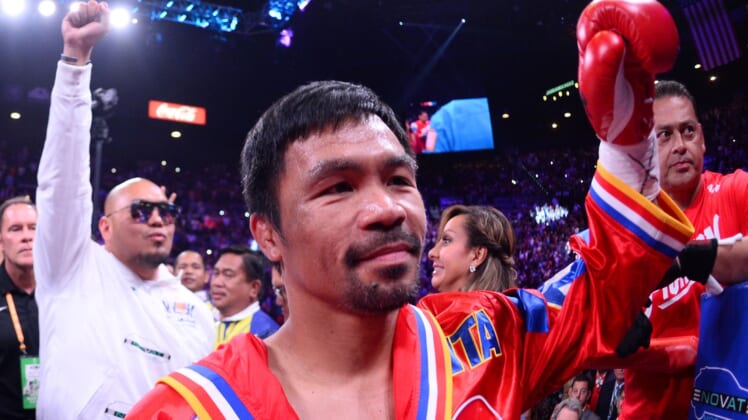 The World Boxing Association named Manny Pacquiao a “champion in recess” on Friday, promoting Yordenis Ugas to the WBA’s top titleholder in the welterweight division.

Pacquiao (62-7-2, 39 KOs) hasn’t fought since a split-decision victory over Keith Thurman in July 2019 to win the “Super Championship” belt, which is the top of the four major belts in the 147-pound division.

The WBA has the power to use the recess clause “when a champion is unable to defend the belt for medical, legal or other reasons beyond his control,” according to the organization’s statement, which didn’t explain the exact reason why the “recess” clause was being invoked for three fighters Friday.

Ugas (26-4, 12 KOs) has won three successive bouts since losing to Shawn Porter in a split decision in March 2019. He earned a split-decision win over Abel Ramos in his most recent fight in September.

Meantime, heavyweight Manuel Charr (31-4, 17 KOs), who holds the WBA’s lesser-known belt and hasn’t stepped into the ring in more than three years, was also named a champion in recess. Charr was scheduled to fight Trevor Bryan in Florida this past Friday, but the fight was canceled when Charr, a citizen of Great Britain, did not have “the right kind of visa allowing him to fight in the United States,” Carl Lewis, attorney for Don King Productions, told England’s The Sun.

The WBA also stripped cruiserweight Beibut Shumenov (18-2, 12 Kos) of his belt since he hadn’t fought since July 2018. Ryad Merhy (29-1, 24 KOs), who held the title in the interim, was named champion and will make his first title defense against Yuniel Dorticos. Merhy and Doricos have 30 days to negotiate a fight before the WBA can take action.

“Shumenov has not defended his title in more than thirty (30) months despite the WBA’s requests that he participate in any of the multiple opportunities that were presented to him,” the WBA said in a statement. “For that reason, the recognition has been withdrawn and now Merhy is the cruiserweight champion.”