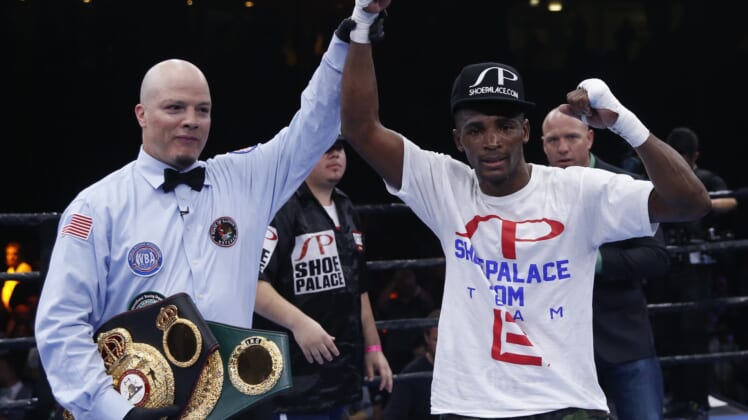 But when talking about skills in the ring, the super welterweight deserves to be mentioned as one of the best weight classes in boxing. This is one of the only weight classes where nothing is guaranteed, with many notable upsets taking place over the past couple of years.

These are the top 10 super welterweight boxers in the world today.

A lesser-known fighter, Michel Soro has fought all but three of his 38 career fights in France. After losing his only career world title match so far in 2012, Soro dusted him off, going 13-0-1 in his next 14 fights on his way to challenging for the WBA Interim Super Welterweight title against Brian Carlos Costano. In that fight, Soro would lose in a spectacular bout that ended in a close split decision. Soro recently became the first-ever WBA Gold Super Welterweight champion, beating Greg Vendetti via 2nd round TKO and successfully defended the belt against Anderson Prestot. His last fight came in November 2019, when he beat Cedric Vitu by 5th round TKO.

A theme of this list is fighters who won world titles in upset wins over high ranking world title holders. Julian Williams is the first to be mentioned on this list but his road to becoming world champion was a bumpy one to say the least. His first world title shot saw him face Jermall Charlo (not to be confused with twin brother and unified super welterweight champion Jermell Charlo) losing via fifth-round knockout.

After winning each of his next four fights, Julian Williams got another chance to fight for a world title when he faced unified IBF, WBA and WBO super welterweight champion Jarrett Hurd in May 2019. He would become unified champion pulling off the upset beating him via unanimous decision. Williams’ reign was short as he would unsuccessfully defend his titles, losing to rising prospect Jeison Rosario the following January. He has not been back in the ring since losing his titles.

Prior to his fight with Julian Williams, Rosario won the biggest fight of his career to that point beating Jorge Cota by split decision. He came in to the Julian Williams fight as a massive underdog added by the fact that the fight was in Williams’ hometown of Philadelphia, Pennsylvania. After losing the first round, Rosario began to take control of the fight battering the champion’s face with destructive power shots. The fight was waived off in the 5th round when the punishment left Williams on shaky legs awarding Rosario the unified WBA, IBF, and IBO Super Welterweight titles. Unfortunately, things have gone down hill for Rosario since that win losing his belts in a unification bout against Jermell Charlo and losing to Erickson Lubin in a WBC title eliminator.

Most fight fans may not be too familiar with Tim Tszyu (son of International Boxing Hall of Famer Kostya Tszyu) because he has exclusively fought in Australia. However, he has had excellent success in his young career, winning the WBO Global Super Welterweight championship and successfully defending it three times. Tim Tszyu is currently on a five-fight knockout streak with notable wins coming against former world champion Jeff Horn and former world title contender Dennis Hogan.

Unfortunately for Erickson Lubin, he took the biggest fight of his career well before he was ready. In October 2017, Lubin was 22 with an 18-0 professional record. Set to face Jermell Charlo for the WBC Super Welterweight title, Lubin was coming off a 4th round TKO win against Jorge Cota and was extremely confident. He ultimately lost via first-round knockout, suffering the first loss of his pro career. Since then, he has recovered well, winning each of his last six fights, including the WBC Silver Super Welterweight title and more recently a win over unified champion Jeison Rosario.

Tony Harrison also became super welterweight champion in his second opportunity losing his first world title fight by 9th round TKO to Jarrett Hurd. He got his second opportunity at a world championship in December 2018 when he fought WBC Super Welterweight champion Jermell Charlo. The fight was very close, but in the end, it was Harrison taking the win by a narrow unanimous decision giving Charlo his first loss as a pro. Charlo would get his revenge in their rematch, winning by 11th round TKO to reclaim his championship. Harrison returned to the ring in April with his fight ending in a draw.

While Jarrett Hurd is the only fighter in the top three that does not hold a belt currently, he sits in the third spot due to his resume. Hurd won his first world title in February 2017 when he beat Tony Harrison to win the vacant IBF Super Welterweight title. After successfully defending his title against Austin Trout, Hurd would unify the IBF title with the WBA and IBO titles after beating Erislandy Lara by split decision with a 12th round knockdown, helping him edge the decision in his favor. He would lose the belts in May 2019 when he lost to Julian Williams by unanimous decision. While he did bounce back from his loss to Julian Williams, he would suffer his second career loss to Luis Arias by split decision.

In January 2017, Lara became WBA and IBO super welterweight champion after knocking out Yuri Foreman. After successfully defending the belt against previously undefeated Terrell Gausha, he lost the belts in a close split decision to Jarrett Hurd. He would regain the WBA regular championship after beating Roman Alvarez and the IBO belt in his bout against Greg Vendetti. In addition to his two super welterweight belts, Lara now holds the WBA regular title at middleweight winning via first-round knockout in April.

Prior to winning the world title, Castano had an impressive resume winning the WBA super welterweight interim and regular world title (not to be confused with the WBA Super world championship). His notable wins include Emmanuel De Jesus, Michel Soro, and Cedric Vitu. He also fought Erislandy Lara to a draw. In his most recent bout on February 13th, Castano won his first official world title beating Patrick Teixeira by unanimous decision to win the WBO Super Welterweight championship. This past Saturday, Castano fought Jermell Charlo to crown the first undisputed super welterweight champion in the four-belt era. The fight was exciting from start to finish, but, no undisputed champion was crowned as it ended in a draw

No fighter on this list has the resume or championship pedigree close to Jermell Charlo in the super welterweight division. He won his first world championship in May 2016 when he beat John Jackson for the WBC Super Welterweight title. He successfully defended the belt three times, including wins against Erickson Lubin and Austin Trout, before losing the belt in a controversial unanimous decision loss to Tony Harrison. He would regain it after beating Tony Harrison in a rematch by 11th round TKO. Charlo would go on to unify the WBC title with the WBA and IBF belts after knocking out Jeison Rosario in the 8th round. Following a draw in an incredible unification bout against Brian Carlos Castano, fans are looking forward to a potential rematch between the two.