The NFL world and Chicago Bears fans are clamoring for rookie first-round quarterback Justin Fields to best Andy Dalton for the starting job, but the Red Rifle fired back at anyone trying to crown his heir apparent prematurely.

Speaking to the media on Wednesday, Dalton praised Fields’ potential and acknowledged the young, dual-threat dynamo has a great career in front of him. However, Dalton also said “it’s my time” for the QB1 role, per PFF:

Dalton signed with the intention of being the starter in 2021, and that was the plan pitched to him by GM Ryan Pace and head coach Matt Nagy. Thus far, Chicago has stayed the course with said plan.

That said, there’s no way the Bears could’ve anticipated Fields falling as far as he did in the NFL Draft. His biggest advocates believed he deserved to go as high as No. 2 overall, yet when the Ohio State star fell to 11th, Pace went to get him, trading up from 20th with the New York Giants.

Fields’ arrival gives Chicago its most legitimate hope in franchise history that it could finally have a superstar at the most important position on the field. Dalton’s relatively modest physical tools and pedestrian NFL track record don’t help his cause, either.

So look, there’s a little bit of apples to oranges here, right? Dalton and Fields have wildly different skill sets, and they were playing entirely different levels of football.

To bolster Dalton’s case a bit, when he was with the Dallas Cowboys last year, he was thrust into duty once Dak Prescott went down with a season-ending injury. We all know Dalton isn’t the fleetest of foot, so the fact that the Cowboys’ offensive line also got decimated by injuries didn’t make matters easier, nor did Dallas’ sieve of a defense.

For his entire NFL career before landing in Dallas, too, Dalton played for the Cincinnati Bengals. In retrospect, getting such a stingy franchise to the playoffs as many times as he did — even if he failed to notch a postseason victory — feels like an achievement in and of itself.

With all that out of the way, though, reality has to set in at some point for Chicago’s brass. 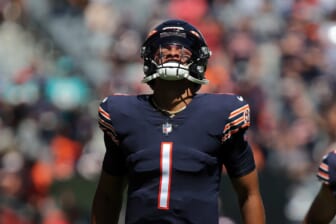 Fields has played exceptionally well throughout training camp, and after a preseason debut in which he completed 14 of 20 passes for 142 yards and a score — and ran for 33 yards on five attempts and another TD — it became clear the NFL game wasn’t too big for him.

Getting the youngster more first-team reps will only help expedite Fields’ eventual transition to the starting role. Additionally, the Bears’ suspect offensive line, which will now be without left tackle Teven Jenkins for the foreseeable future, could benefit from Fields’ ability to extend the play with his feet.

There’s no question Chicago’s offense has a higher ceiling with Fields in the lineup, even with zero regular-season NFL snaps under his belt. That’s how lethal of a runner and downfield thrower he is.

Dalton’s statement may be true in the most literal present tense, but as soon as a few weeks’ time, it may already be dated and made viral by Freezing Cold Takes for immortalized public consumption.

Are the Bears a postseason team in 2021? See if they make the cut in our NFL playoff predictions