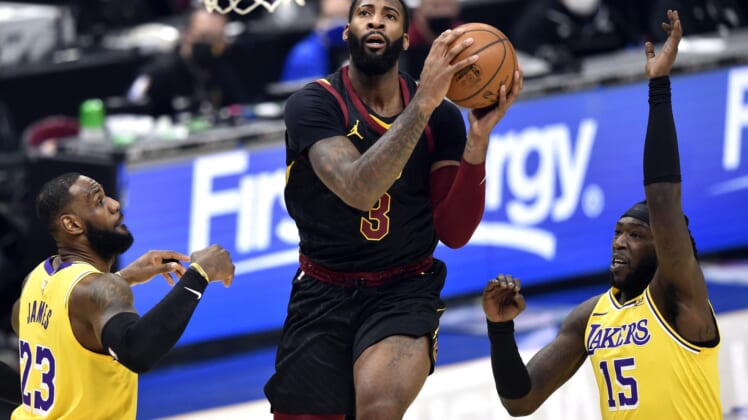 Andre Drummond is expected to sign with the Los Angeles Lakers, becoming the second All-Star big man to join an NBA title contender on the buyout market this weekend.

Drummond, a two-time All-Star selection, agreed to a buyout with the Cleveland Cavaliers on Friday. The 6-foot-19 center last played in a game on Feb. 12. Shortly after the acquisition of Jarrett Allen, Cleveland benched Drummond as it explored trade options. With no team willing to take on his $28.75 million salary and interesting in giving up draft-pick compensation, the Cavaliers relented after the NBA trade deadline and bought out the remaining months of his contract.

According to ESPN’s Adrian Wojnarowski, Drummond intends to sign with the Lakers once he clears waivers at 5 PM EST. He received interest from the Brooklyn Nets, Charlotte Hornets, Boston Celtics and New York Knicks, but strong recruiting efforts by the Lakers’ players bring him to Los Angeles.

While he won’t be able to play immediately, the signing couldn’t come at a better time for the Lakers.

Impact of Andre Drummond on the Lakers

Entering Sunday’s action, the Lakers are 5-5 in their last 10 games and quickly falling down the NBA standings without LeBron James and Anthony Davis. Worse yet for the franchise, LeBron is weeks away from a potential return from his high-ankle sprain and there isn’t even a timetable for Davis to hit the practice court.

The Lakers recently snapped their four-game losing skid, knocking off Drummond’s former team 100-86. But defeats to the Atlanta Hawks, Phoenix Suns, New Orleans Pelicans and Philadelphia 76ers showed how much trouble this roster is in without its two stars.

Montrezl Harrell is doing his best under the circumstances. In the four games since James went down, Harrell is averaging 21.3 points and 8.5 rebounds per game. But during that three-game losing streak after the injury, the Lakers were outrebounded 117 to 143.

The Lakers signed Marc Gasol this season for his defense, but this signing will push him into a reduced role. Drummond should start almost immediately, but coach Frank Vogel might bring him along slowly since the big man hasn’t played in over a month.

All of this will ultimately come down to the NBA Playoffs. Andre Drummond should help the Lakers win a few more games while LeBron and Davis are sidelined, which could make the difference between this team being a No. 7 seed or a No. 5 seed. in the Western Conference.

When everyone is healthy, opponents will have even more difficulties against the Lakers. Drummond might no longer be a dominant force, but he could cause problems with opponents already focused on LeBron and Davis. Plus, his skills on the glass will help provide Los Angeles with a few extra shots.

This might not be the only signing coming for the Lakers, either. According to ESPN’s Bobby Marks, the Lakers are $954,349 before the hard cap and one open roster spot. If the right wing defender becomes available on the buyout market, don’t be surprised if the Lakers strike.