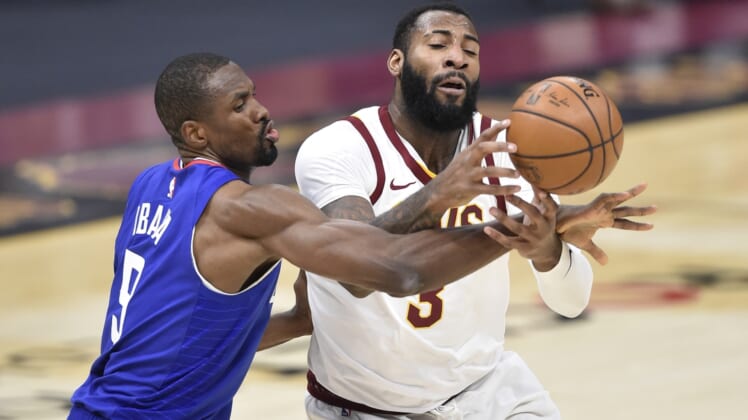 Andre Drummond’s brief tenure with the Cleveland Cavaliers apparently is over.

ESPN reported Monday that the Cavaliers plan to sit Drummond as they seek to trade him before the March 25 deadline.

Drummond, a two-time All-Star, did not play Sunday night when the Cavaliers dropped their seventh straight game, this one to the Clippers. He sat on the bench at Staples Center in Los Angeles wearing a sweatshirt with the word “farewell” on the front.

Rest was the reason given for his absence from the lineup, but ESPN said general manager Koby Altman had agreed with Drummond and his agent that the veteran will remain inactive. Cleveland instead intends to start 22-year-old Jarrett Allen, received in a trade from the Brooklyn Nets last month, at center.

The Cavaliers acquired Drummond, now 27, in February 2020 from the Detroit Pistons for John Henson, Brandon Knight and a 2023 second-round pick.

Drummond played in eight games for the Cavaliers last season before the season was suspended amid the coronavirus pandemic in March, and Cleveland didn’t qualify to resume in the NBA bubble near Orlando last summer.

After the season, he exercised the $28.75 million option on the five-year, $127.2 million deal he signed with Detroit in July 2016. He will become a free agent after this season.

ESPN said the Cavaliers are beginning to assess the trade market for Drummond, but matching salaries in a transaction could prove difficult.

In 25 games this season, Drummond has averaged 17.5 points and 13.5 rebounds. He’s second in rebounds in the NBA, trailing Clint Capela of the Atlanta Hawks (13.9).

He has led the NBA in rebounding four times.