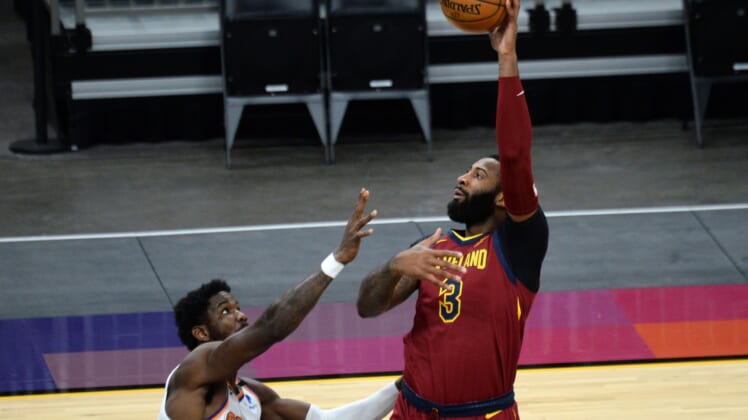 Andre Drummond is familiar with being traded during the season, given he was flipped to the Cleveland Cavaliers just a year ago. With the NBA trade deadline approaching, the All-Star center could be headed to a new team shortly.

Many in the Eastern Conference are thin at center, lacing a reliable big man who can score and dominates the glass. As a result, Drummond has become one of the most coveted players available. While the trade deadline isn’t until March 25, the Cavaliers might be closing in on a blockbuster.

According to The Athletic’s Shams Charania, the Cavaliers are in active discussions on a blockbuster deal that would send Andre Drummond to the Toronto Raptors. The report comes just a day after Cleveland pulled its starting center from the lineup for rest. However, per The Athletic, the real motivation behind his benching was Drummond’s “attitude and play” as the team engaged in negotiations with other clubs.

Drummond was reminded about the cold nature of this profession last February. After being sent away by the Detroit Pistons, he blasted the organization for dealing him and not giving him any notice of what was coming. Needless to say, the 27-year-old should be far more aware of Cleveland’s plans for him.

A two-time All-Star center (2016, ’18), Drummond exercised his $28.7 million option before the 2020-’21 season. He ranks fifth among the highest-paid centers in the NBA. Given his salary, the Raptors would need to send multiple players back to make a deal work financially. Specifics regarding a potential return aren’t known, but Aron Baynes ($7 million), Chris Boucher ($6.5 million) and Norman Powell ($10.8 million) are the team’s highest-paid players outside of Pascal Siakam, Kyle Lowry and Fred VanVleet.

Drummond would represent a significant upgrade over Baynes. While he isn’t playing at an All-Star level, Drummond is still averaging 17.5 points, 13.5 rebounds, 1.6 steals and 1.2 blocks per game.

Any team that acquires Drummond will also receive his bird rights, which means they can go over the NBA salary cap next season to re-sign him.

For the Cavaliers, it’s only a matter of time before a trade happens. Cleveland landed Jarrett Allen in the blockbuster James Harden trade, giving the team a big man to build around for the future. Drummond isn’t in the club’s long-term plans and any return they get for him will be considered a positive.