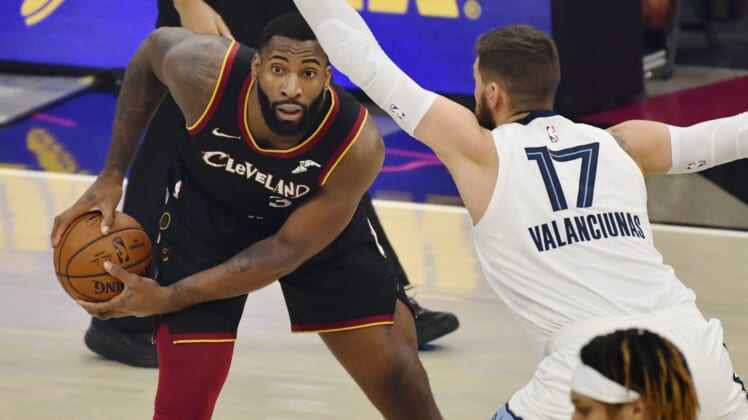 Following the huge four-team trade that sent James Harden to the Brooklyn Nets earlier in January, NBA rumors have suggested that the Nets are looking to fill out the remainder of their roster with veteran additions.

Brooklyn still has two roster spots open and need to find more depth outside of the big three of Harden, Kevin Durant and Kyrie Irving. Unfortunately, Brooklyn lacks both the cap room and draft pick assets to add another player or two in a deal ahead of the March NBA trade deadline.

We now have some more information about who Nets general manager Sean Marks is targeting, courtesy of Kevin O’Connor of the Ringer.

The report notes Brooklyn is hopeful that Cleveland opts to buy out Drummond at some point moving forward on the season. That seems somewhat unlikely given his status as an impending free agent and the fact that the two-time All-Star performer is playing at a high level this season.

A potential Drummond buy out is also complicated by the fact that Cleveland is a surprising 8-8 on the season and currently finds itself as the sixth seed in the Eastern Conference.

Brooklyn’s decision to include Jarrett Allen in the James Harden trade makes the center position a big need behind DeAndre Jordan. The Nets have also been linked to JaVale McGee should he be bought out by this very same Cavaliers team.

Jordan has performed well thus far this season, averaging 5.8 points and 6.8 rebounds in 17 games. With that said, there’s a lack of depth and defensive prowess behind him in the front court with the Nets. It’s something first-year head coach Steve Nash focused on following an ugly sweep at the hands of the Cavaliers in back-to-back games last week.

Adding Drummond or McGee to the mix would certainly help in this regard.

The Nets head into Monday’s game against the Miami Heat yielding an average of 116.8 points, the fourth-highest figure in the NBA. They also rank 25th in the Association in defensive rating.

Regardless of the Nets’ superstar trio, they need to improve on defense to be taken seriously as legit NBA title contenders moving forward on the season.