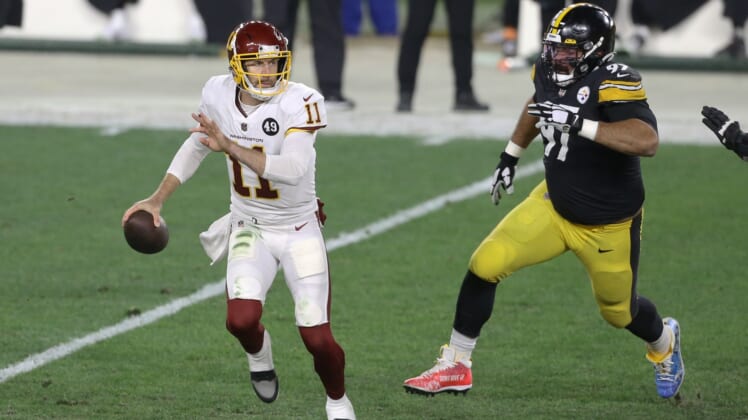 The Washington Football Team entered Monday night’s Week 13 NFL game in need of a win to take over first place in the NFC East. This, despite the fact that Alex Smith and Co. were 4-7 on the season.

Standing in Washington’s way was a Pittsburgh Steelers squad that was 11-0 heading in. Pittsburgh was overwhelming favorites to take out Washington.

It looked like this would be the case with the Steelers taking a 14-0 lead despite some tremendous play from Chase Young and Washington’s defense.

Washington came all the way back to make it a 17-17 game late in the fourth quarter when the story of the NFL season, quarterback Alex Smith, did his thing to help Washington pull off the biggest upset thus far this year.

This resulted in a go-ahead field goal and a 20-17 lead. Steelers quarterback Ben Roethlisberger was then intercepted on their following possession to put this game away.

What an absolutely amazing win for Ron Rivera’s squad. Washington now finds itself at 5-7 and in first place in the NFC East.

This comes amid a season in which Rivera himself has battled cancer while Alex Smith returned from a two-year absence due to a leg injury that almost cost him his life. For the Washington organization as a whole, it also comes months after a drama-filled offseason threatened to derail everything.

Obviously, a lot of the focus was on Alex Smith’s comeback and a signature win for the veteran quarterback.

The rest of the reactions dealt with Washington somehow finding a way to defeat an 11-0 team. This represented the squad’s third consecutive win after starting the season with a 2-7 record.

What an amazing story in the nation’s capital right now.