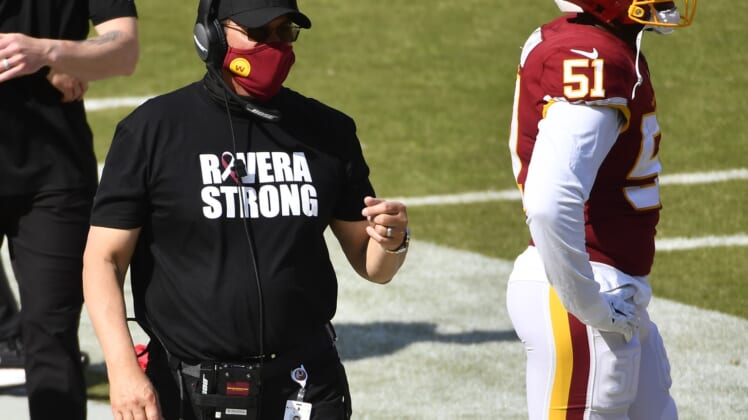 Washington Football Team head coach Ron Rivera congratulated his players for their performance in Sunday’s win over the Dallas Cowboys. Now, Rivera is being congratulated for his own special victory.

Rivera, who was diagnosed with skin cancer this summer, completed his last round of treatment on Monday morning. After ringing the bell in celebration, he was greeted in an emotional moment by numerous medical personnel cheering and congratulating him.

Rivera didn’t exactly come into the summer with the easiest of circumstances to begin with. After becoming Washington’s head coach, the team found itself amid numerous controversies. The club finally changed its name, which Rivera supported, but that was followed by The Washington Post feature stories detailing the toxic culture of sexual harassment within the organization before he arrived.

Rivera spoke out and didn’t hold back about how he felt the team was run before his arrival and vowed to make changes. He also  expressed support for the Black Lives Matter movement, during a time when players were calling on the league and coaches to stand by them.

The head coach showed his strength through it all and then had to fight cancer. Somehow, through incredible courage and will, he coached through his treatments. Now, a man who everyone could learn something from, is there to offer support for those also fighting cancer.

“More than anything else, it’s take care of yourself,” Ron Rivera said, via Pro Football Talk. “The biggest thing I’ve learned is that it really has to be about you. You have to be selfish, to be honest with you. And it’s OK to be selfish when it comes to you and your health.”

While Washington might not win many games this season, this team is headed in the right direction under Rivera.