Aaron Rodgers passed for two touchdowns and ran for another, Aaron Jones had 110 yards of total offense and the defense allowed its fewest points this season as the visiting Green Bay Packers downed the Chicago Bears 24-14 on Sunday afternoon.

Rodgers improved to 21-5 against the NFC North-rival Bears in his career behind an efficient performance. He was 17-for-23 through the air for 195 yards while rushing for 19 yards. Rodgers ran 6 yards for his third total touchdown with 4:30 remaining, as Green Bay quickly answered a Chicago touchdown that snapped a run of 17 consecutive Packers points.

Moments earlier, the Bears drew to within 17-14 on a 5-yard touchdown pass from Justin Fields to Darnell Mooney, Chicago’s first points since with 6:45 left in the first quarter. 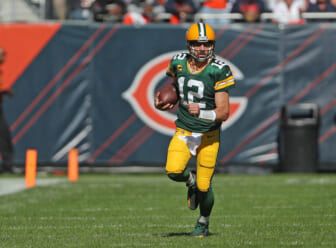 Chicago (3-3) visited the end zone on its opening drive, capitalizing on a Green Bay punt with an eight-play, 80-yard drive that culminated with a 1-yard scoring run from Khalil Herbert, the first touchdown of the rookie’s career.

A 26-yard defensive pass interference penalty against the Packers helped bring the Bears to the 1-yard line, and was preceded by a 20-yard pass from Fields to Allen Robinson on third-and-three.

Green Bay navigated a solid Bears pass rush without center Josh Myers for the majority of the afternoon. Myers, who returned the lineup Sunday following a hand injury, suffered a leg injury on the opening drive and did not return.

The Packers took a 10-7 lead into halftime, then went up 17-7 on their first possession of the third quarter on a 12-yard scoring pass from Rogers to Jones. Jones rushed for 76 yards on 13 carries and had four receptions for 34 yards.

Davante Adams had four receptions for 89 yards for Green Bay.

Fields was 16-for-27 passing for 174 yards with one touchdown and one interception, while adding 43 yards on the ground. Herbert rushed for 97 yards on 19 carries.