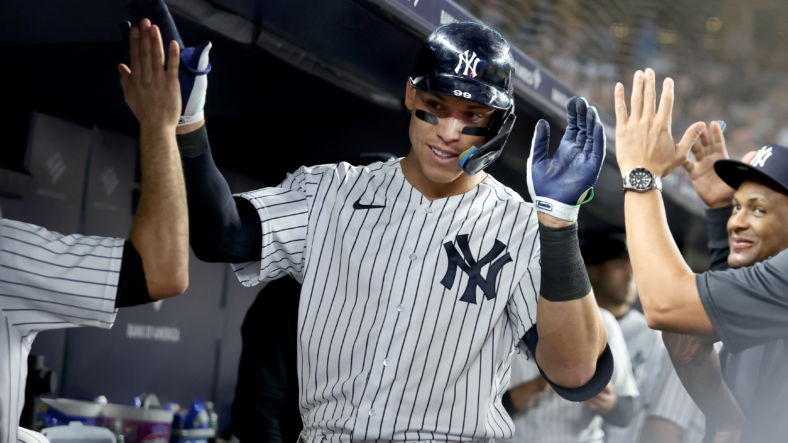 New York Yankees outfielder Aaron Judge just became the sixth player in MLB history to hit 60 homers in a single season. It came in the bottom of the ninth inning against the Pittsburgh Pirates at Yankee Stadium on Tuesday, and put him in some absolutely elite company in the process.

Judge’s shot came with the Yankees down 8-4 in the bottom of the ninth. It traveled 430 feet over the left center-field fence and exited his bat at 111.6 miles-per hour.

By virtue of this home run, Judge has now tied Babe Ruth for the second-most in New York Yankees history, behind only the 61 Roger Maris hit back in 1961. He’s also now one away from tying Maris for the American League record.

Some believe that Maris’ 61-year old mark is the official record in baseball given that Barry Bonds, Mark McGwire and Sammy Sosa stand above Maris and were all involved in the MLB Steroid era. Judge himself is not of that belief. Either way, he’s close to breaking the American League record after Tuesday night’s blast.

What’s even more amazing here is the fact that Giancarlo Stanton came to bat a few minutes later with the bases loaded and the Yankees down by three. He proceeded to hit a walk-off grand slam at Yankee Stadium, creating a stirring scene in the Bronx.

The Yankees now have 15 games remaining on their schedule. Eight more of those games come at Yankee Stadium, including four against the division-rival Boston Red Sox later this week. Imagine Aaron Judge tying or breaking Maris’ mark against the Red Sox at home. That would be absolutely insane.