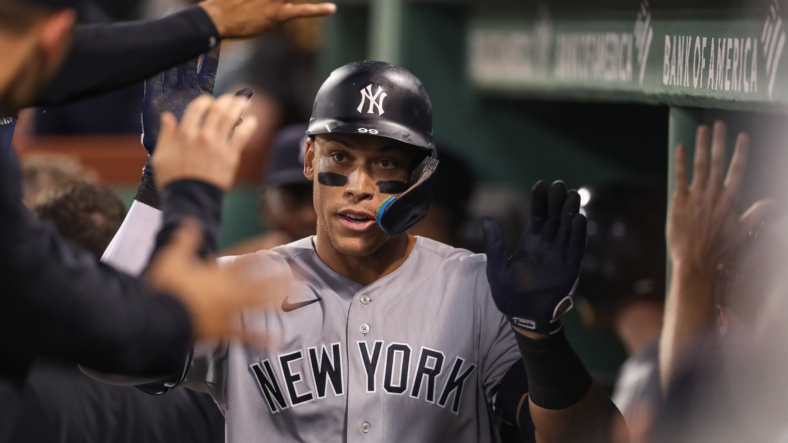 New York Yankees outfielder Aaron Judge entered Tuesday’s outing against the Boston Red Sox having failed to hit a hom run in five consecutive games. In the midst of a potentially historic season, that’s been an exception to the rule.

In the sixth inning of said outing against the Red Sox at Fenway Park, Judge broke this minor drought with a 383-foot blast off Nick Pivetta to tie the game at three. More importantly, he inched closer to the American League record of 61 homers previously set by former Yankees legend Roger Maris back in 1961.

The dude then did it again in the eighth inning with New York down 4-3. This time, Judge took Garrett Whitlock deep for another solo home run. It traveled 389 feet and exited his bat at north of 100 miles-per-hour en route to clearing the Green Monster.

Judge, 29, is now on pace to crack 64 home runs this season with 20 games remaining on the Yankees’ schedule following Tuesday’s action. That would represent an all-time high in American League history.

According to betting lines, Judge is still favored to best Maris’ mark in the junior circuit. He still has to catch some major fire over the final three weeks of the season in order even challenge for the all-time MLB mark.

Unlike all of the players listed here outside of Maris, Judge has not be subject to criticism of the MLB Steroid Era and linked to banned substances. It has led to some believing that Maris’ record should what we’re focused on. Judge disagrees.

Even if Judge doesn’t catch Bonds (he won’t), the pending free agent is closing up shop on one of the greatest seasons in MLB history. We should just enjoy it.