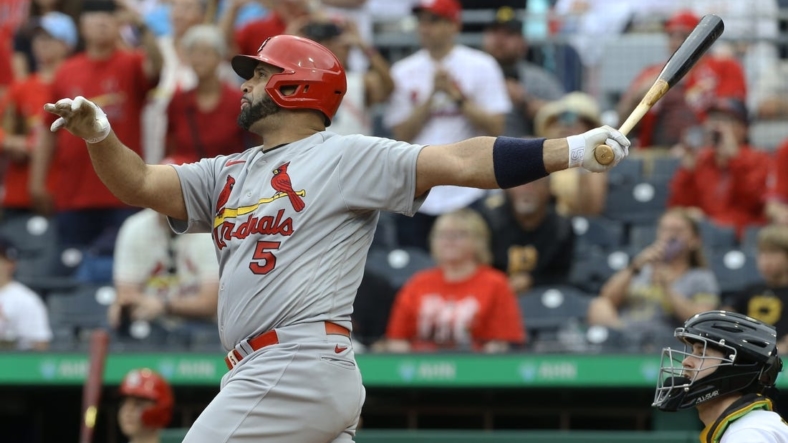 Aaron Judge and Albert Pujols will resume their pursuits of two of the most hallowed marks in baseball history on Tuesday night, and both sluggers are favored to reach their respective milestones.

Judge has 55 home runs on the season, just six shy of tying Roger Maris’ American League record, set in 1961. Judge is on pace to hit 62 by the end of the regular season, despite failing to homer in his past five games.

SportsBetting.ag is offering -180 odds that Judge will beat Maris’ mark compared to +140 that he will not. Those odds indicate he has a 64.3 chance of setting a record, according to the sportsbook.

The Yankees open a series at Boston on Tuesday, with the Red Sox scheduled to send Nick Pivetta (9-11, 4.29 ERA) to the mound.

Meanwhile, Pujols enters Tuesday’s action with 697 career homers after belting his 18th of the season on Sunday.

SportsBetting.ag is offering -160 odds that Pujols will reach 700 career home runs compared to +120 that he will not. That indicates a 61.5 percent chance of reaching the career milestone.

The Cardinals will host the Brewers on Tuesday night, with Milwaukee scheduled to start Matt Bush (2-2, 3.23).

One record that is not expected to fall is the regular-season wins record of 116, shared by the Seattle Mariners (2011) and Chicago Cubs (1906). The Los Angeles Dodgers are on pace for 112 this season, leaving them with a 4.8 percent chance of setting a record, according to the sportsbook.

The Dodgers are being offered with longshot odds of +2000 that they will rally to set a record for wins. The Dodgers are 97-43 entering play Tuesday with 22 games to play. They would need to win 20 of them to set the record.