Los Angeles Rams star Aaron Donald on fight with the Bengals: ‘It was just practice’ 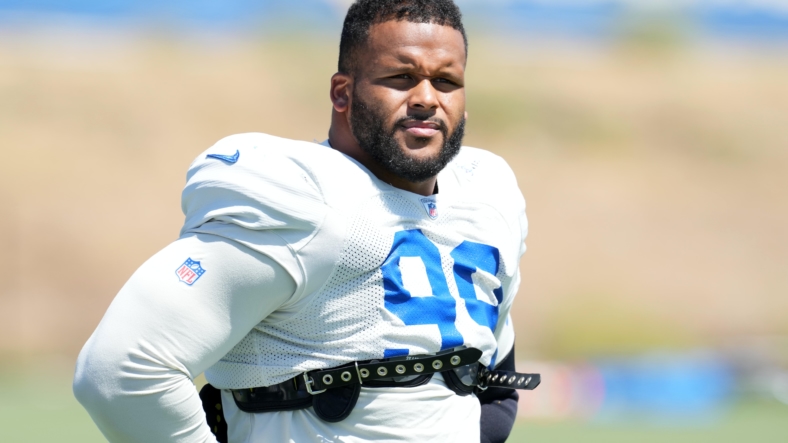 Three-time NFL Defensive Player of the Year Aaron Donald was in the news last week after a video captured him swinging his helmet at Cincinnati Bengals players during a joint practice.

The incident in question initially raised concerns that Donald would be suspended by the NFL after Cleveland Browns star Myles Garrett saw himself banned for six games back in 2019 after using his helmet to hit Pittsburgh Steelers quarterback Mason Rudolph.

With that said, Donald is not subject to punishment by the league. That’s primarily because practices are sanctioned by teams. In short, the Rams would have to suspend their best player. That’s about as likely as Garrett and Rudolph making a bromance movie.

In talking about the incident during a recent interview on the AP Pro Football Podast, Donald played down the incident in a big way.

Donald also noted that he did address the situation with both his teammates and head coach Sean McVay, saying that everything is OK heading into Los Angeles’ season opener against the Buffalo Bills two weeks from Thursday.

In the recent reveal of the NFL’s top-100 players, Donald finished second behind the legendary Tom Brady. It’s not for nothing given that his colleagues vote on this.

We’ve seen an impassioned Donald lose his cool during games at times throughout his career. A repeat of this incident in an in-game situation would lead to a lengthy suspension, creating major problems for the defending champions in the process.

In addition to being a three-time NFL Defensive Player of the Year winner, Donald has earned seven consecutive All-Pro honors and has made the Pro Bowl each of his first eight seasons in the NFL. He heads into the 2022 campaign ranked 40th on the all-time list of sacks, behind Andre Tippett.

This is to say that the Rams can’t afford to lose Donald for a substantial amount of time if they hope to bring a second consecutive Lombardi Trophy to Southern California.