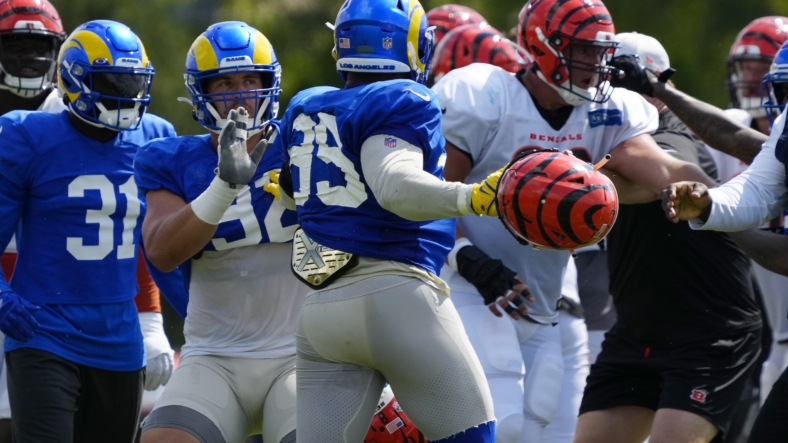 Los Angeles Rams defensive tackle Aaron Donald sparked outrage and discussion on Thursday after swinging helmets at Cincinnati Bengals players during a joint practice. However, he won’t face a suspension from the NFL and the league reportedly won’t be able to discipline him.

Donald’s actions during the joint practice on Thursday were similar to what happened with Cleveland Browns edge rusher Myles Garrett. During a 2019 brawl with the Pittsburgh Steelers, Garrett pulled the helmet off quarterback Mason Rudolph and then struck him in the head with it.

The NFL issued an indefinite suspension the next day, requiring him to meet with NFL commissioner Roger Goodell to be reinstated. After missing the remainder of the 2019 season, Garrett was reinstated in 2020. While that would seemingly set a precedent for Donald’s actions, one important difference will prevent him from facing league discipline.

Mike Florio of Pro Football Talk confirmed that NFL rules don’t allow the league to discipline a player for behavior during joint practices. Teams are responsible for overseeing the conduct of their players during practice, preventing the league from having any involvement in the matter.

The only party that could face discipline is the Rams. As Florio notes, the NFL can penalize the franchise if it believes there was an organizational failure to exercise proper control over its players. For that to happen, the league would need to launch an investigation to determine what went wrong and in what specific ways the coaching staff is responsible for the players’ actions.

Los Angeles does have the authority to discipline Donald, but the team isn’t going to suspend the All-Pro defensive tackle who is one of the most irreplaceable players in the NFL. While a fine is possible, the Rams made Donald the highest-paid player in NFL history among non-quarterbacks.

At the very least, the NFL will likely strongly encourage teams to select their opponents for joint practices more carefully. The decision for the reigning Super Bowl champions to hold practices with the runner-up, when joint practices are already prone to brawls, was always a dangerous gamble. Fortunately, no Bengals players were injured during Donald’s inexcusable acts.