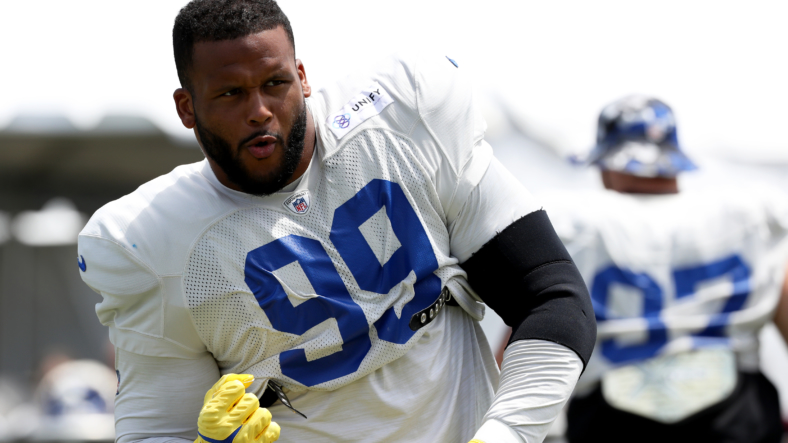 Aaron Donald is a bad man. Not off the field, but on the field? No one wants to mess with the three-time NFL Defensive Player of the Year. He’s a physical specimen that few, if any, can match.

But the Cincinnati Bengals don’t care. They’re probably still seething over losing to Donald and the rest of the Los Angeles Rams in Super Bowl LVI. Donald and the Rams may have won that battle, yet what Donald did today should not be celebrated. Not at all.

The Rams and Bengals are holding joint training camp practices this week, giving each team a good test ahead of the season ahead of their Saturday preseason finale against one another. Just six months ago, each were competing for a chance to win a Lombardi Trophy, now they’re competing for roster spots. Well, not Donald, but several others are.

As usual when teams are battling other teams in training camp, it doesn’t take much for tempers to flare. We have no clue just how the vibes changed at practice on Thursday, but it led to an all-out brawl, which Donald was at the center of.

While the video is a bit zoomed out, it’s not difficult to see No. 99, Donald using a Bengals helmet like a weapon, smashing other players on Cincinnati’s team. This is extremely dangerous and a definite no-no.

Eventually, Donald gets shoved to the ground, but not before he swung the Bengals helmet on multiple occasions. Sam Greene, a Cincinnati photographer, even captured this photo, where Donald is striking pure fear into his opponent, holding not one but two helmets, seemingly ready to swing.

This brawl has shades of Myles Garrett going ham on Mason Rudolph in Week 11 of 2019. Garrett ended up missing six games due to suspension from the event.

Donald is unlikely to face any punishment from this scuffle, but it highlights the dangers of joint training camp practices, as players would never act this way against their own teammates. And if it were anyone other than Donald, the team would likely punish him. But what can you say to one of your team leaders and best players on the roster?

Hopefully, no one on the Bengals was hurt amidst this madness. Getting in fights during heated battles is one thing, but grabbing a weapon and going nuts? That’s an entirely different situation. Donald can’t be doing this, and as a player entering his ninth season in the NFL, he knows better.