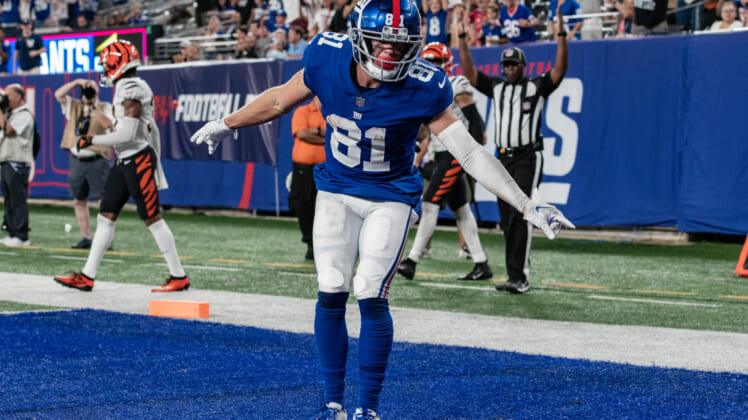 The New York Giants improved to 2-0 this preseason as they defeated the Cincinnati Bengals 25-22.

Of course, the preseason is more about team and player development while working on technique as opposed to wins and losses.

With less than three weeks until the regular season opener against the Tennesse Titans, head coach Brian Daboll has to be pleased with how his players have progressed since the beginning of the summer.

We all know who the star players are on the Giants that will make or break their season. But there have been several players that were once under the radar, that stand a good chance of making the final roster.

Here are the top five players that have stood out the most in the preseason.

To say that Collin Johnson has made the most of his opportunity this summer would be a huge understatement. The third-year wide receiver from Texas has stood out not only in training camp but also in the preseason.

The 6-foot-6, 220-pound wideout has been a dependable receiver catching 10 passes for 123 yards in New York’s first two preseason games. A physical receiver such as Johnson can be a huge benefit for Big Blue particularly in the red zone. The fact that he’s also on the kick return team bodes well for his chances of making the final roster.

Another player from the Giants’ receiving room that has been impressive and enhanced his chances of making the roster this summer is Richie James.

In the Giants’ first preseason game against the Patriots, James had three receptions for 44 yards and a touchdown. Although he only had one reception for eight yards against the Bengals, he did have a nice punt return for 17 yards. Versatile players are always a plus and the fact that James has showcased his skills as a receiver and returner will not be overlooked by the coaching staff.

Given the fact that Saquon Barkley has missed games in each of the last three seasons due to injury, it’s imperative that New York has quality backups that can produce if the opportunity presents itself.

One of the running backs that has been making a name for himself this season is second-year running back Antonio Williams.

Williams led the Giants in rushing against the Patriots with 61 yards on nine carries and scored on a two-yard touchdown run. Then against the Bengals, he gained 26 yards on the ground on five carries and hauled in seven receptions for 46 yards.

Although he was playing against backups, any time you average over six yards per carry, people are going to take notice. It will be difficult to cut Williams, especially if he has a similar performance against the Jets in the preseason finale.

Beavers has been an active and physical presence on the field this summer. The Giants’ sixth-round pick has seen time with the first team defense during training camp, and against the Patriots he had three tackles.

The rookie linebacker did exit last night’s game due to a knee injury, but the team is hopeful it’s not a serious injury. If he’s not expected to miss any significant time, he could be in Big Blue’s plans for this season.

Alex Bachman had a Victor Cruz-like preseason performance against the Bengals on Sunday night. The second-year receiver from Wake Forest had a game-high 11 receptions for a game-high 122 yards, and two touchdowns.

He also had a special teams tackle on a kickoff return that energized the crowd. Bachman spent most of last season on New York’s practice squad but did appear in three games. He’s a fan favorite and made a strong case that he should be in the mix with Big Blue in some capacity this season.