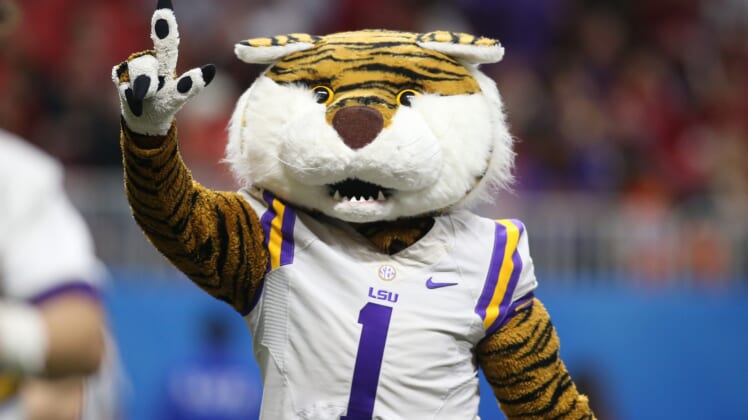 As things stand, the world will certainly not be back to business as usual by the time normal college football season rolls around due to the coronavirus pandemic. However, it seems the season is still going to happen one way or another.

How exactly this altered season will look is anyone’s guess. Delaying till spring is a much-discussed option, but has received firm pushback from at least one coach. When games finally do happen, they’ll likely be played with no or greatly reduced fan presence.

Even before games would normally be played, programs are and will be impacted. College football is a year-round sport, and spring and summer team workouts and trainings are already out the window. When it becomes safe to play again, preseason will likely be shortened as much as possible in favor of starting the season. Obviously every single team will feel the effects of the virus, but here’s five that have more to lose than most.

For LSU, the biggest question heading into 2020 is obvious: Who is going to replace Joe Burrow? The Tigers have options, notably redshirt junior Myles Brennan and true freshmen TJ Finley and Max Johnson. All three were four-star recruits, and each could realistically have had a shot at the starting job.

However, now that spring camp and any in-person team activities during the summer are out the window, Brennan likely has the job locked up. Finley was practicing with the team even before their Peach Bowl appearance, but a few months is not enough time for him or Tigers’ coaches to feel confident with his fit in the system. Brennan isn’t bad and may have come out on top anyway, but more options is always better, especially for a decision as important as this one. Having the heir to Burrow’s crown being picked essentially by default can’t be what Tigers fans were hoping for.

Georgia’s problem is one that it would have had anyway, but that is made substantially harder to deal with in these circumstances. The Bulldogs will enter 2020 having lost to the draft many key pieces of their offense from last season, including starting quarterback Jake Fromm. Of the eight Bulldogs projected to be drafted, six come from the offensive side of the ball.

Even before the departure of these players, Georgia often struggled offensively, relying on its nation-best defense while putting up roughly average scoring numbers.

The Bulldogs have attempted to address this issue, hiring Todd Monken to be their new offensive coordinator and winning the transfer race for star dual-threat quarterback Jamie Newman from Wake Forest. But with new faces comes an adjustment period, and Georgia is missing invaluable time to get everyone on the same page. Having both an offensive coordinator and quarterback be brand-new to a program is a tough transition at the best of times, and will be even harder with less time to adjust.

Mississippi State’s key move this off-season was the big-money acquisition of new head coach Mike Leach. Leach, known for his air raid offenses, will look to turn around what last year was only the 74th highest-scoring team in the NCAA. He will also look to bring a new culture to the Bulldogs organization, as some have pointed to discipline issues being behind the firing of his predecessor, Joe Moorhead.

However, thanks to the coronavirus, Leach will have more trouble than anticipated installing his system and culture into the program. Less than two months after Leach’s hiring was announced, the SEC suspended all athletics activities. Now Leach is at home for the foreseeable future, tweeting Tiger King memes instead of having the chance to work with his new players. Heading into an SEC season under-prepared is a recipe for disaster, and it looks to be where Leach and the Bulldogs will find themselves when football comes back.

Like LSU, Oregon finds itself scrambling to replace a quarterback that went in the first round of the 2020 NFL draft in Justin Herbert. Like Georgia, the Ducks picked up an option from the transfer portal in Anthony Brown, who played well for Boston College in 2019 before a knee injury ended his season. However, according to head coach Mario Cristobal, redshirt sophomore Tyler Slough was still the team’s starter at the end of spring practices.

With two four-star true freshmen in Jay Butterfield and dual-threat Robbie Ashford also on the roster, Oregon was set for a classic quarterback competition this off-season. Thanks to the virus, that competition will likely be compressed into a much shorter period. Unless they want it to spill over into the regular season, Cristobal and the rest of the Ducks coaching staff will have to make a tough decision based on less reps and less time with each player — a worrying prospect.

After Mark Dantonio’s surprising resignation, the Spartans poached Mel Tucker from Colorado on February 12, the second-latest coaching hire of the year. A month and one day later, the school postponed its spring practices, later officially cancelling them. Dantonio was in charge at Michigan State for over a decade, and now Tucker has had just barely a month to take his place.

Tucker will get more time before the season starts, but it’s unlikely to be much, perhaps leaving him with just two months in the organization before he coaches his first game. Tucker could use all the time he can get, given that quarterback Brian Lewerke has left for the draft with no obvious heir apparent waiting in the wings. With the situation as it is, Michigan State’s new head coach may be regretting changing his mind and not waiting for another year to make his big money move.