What are the best Philadelphia Eagles teams in history? Where will the 2022-23 iteration stand when all is said and done?

As the league-best Eagles look to hoist just the second Super Bowl trophy in the history of the franchise, we check in on five of the greatest teams in Philadelphia history.

This list includes a couple modern-day iterations as well as two teams in the pre-Super Bowl era that absolutely dominated their opponents. Below, we give you the five best Philadelphia Eagles teams of all-time.

Defensively, this squad dominated at nearly every turn. That included yielding 10 points or fewer a total of seven times. An All-Star cast of five Pro Bowlers was spearheaded by cornerback Lito Sheppard (five interceptions) and safety Brian Dawkins (four interceptions).

Unfortunately, it would not result in a Super Bowl title with Tom Brady and the New England Patriots standing in the way. It doesn’t take away what Philadelphia accomplished in the regular season and on its way to the big game.

How good were the 1960 Eagles? They boasted two future Hall of Fame quarterbacks in that of Norm Van Brocklin and Sonny Jurgensen. They were joined in the backfield by a fellow future Canton member in running back Tommy McDonald.

Philly ran roughshod through NFL competition during the regular season. Buck Shaw’s squad finished third in scoring and seventh in points allowed. The team ran off a nine-game winning streak before losing to Washington in the regular-season finale.

However, it was Philadelphia’s performance against Vince Lombardi and the Green Bay Packers in the NFL Championship Game that put this squad on the map.

With the Eagles down 6-0 in the second quarter, Van Brocklin hit McDonald on a 35-yard touchdown pass to give these Eagles the lead. Down 13-10 in the fourth quarter, running back Ted Dean returned a kickoff 58 yards before the he ultimately scored the game-winning touchdown on a five-yard run. This represented the Eagles’ final championship of the pre-Super Bowl era. They would not win another title until…

This iteration of the Eagles entered the season projected to win less than nine games. Most had the New York Giants and Dallas Cowboys ahead of them in the NFC East. Doug Pederson’s squad was coming off a 7-9 performance the previous season. Questions were abound as it relates to young quarterback Carson Wentz.

What followed was glorious for the City of Brotherly Love. Wentz was absolutely brilliant as a sophomore, throwing 33 touchdowns against seven interceptions before being injured. Zach Ertz, Nelson Agholor, Alshon Jeffery and Torrey Smith combined to provide him consistent targets. Defensively, these Eagles yielded the fourth-fewest points in the NFL as Philadelphia won by an average score of 10 points per game. 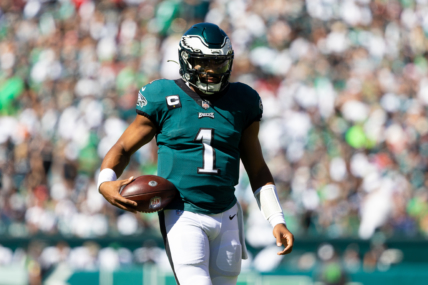 With veteran Nick Foles replacing Wentz under center for the playoffs, most still didn’t give Philadelphia much of a chance despite its 13-3 regular-season record.

About that? Foles led Philadelphia to wins over the Atlanta Falcons and Minnesota Vikings in the NFC Playoffs before taking on Tom Brady and the favored New England Patriots in Super Bowl LII. In what was among the most-surprising results of a championship game in NFL history, Foles outplayed Brady en route to leading Philadelphia to a 41-33 win and its first Super Bowl title. The veteran journeyman threw for 373 yards with three touchdowns.

Philadelphia won three championships in the pre-Super Bowl era. The first one came back in 1948 with Hall of Fame head coach Greasy Neale leading the charge. This season saw the Eagles outscore their opponents by an average of 18.3 points per game — the second-largest figure in franchise history.

Tommy Thompson threw a league-high 25 touchdowns in 12 games. Hall of Fame running back Steve Van Buren put up the second of what would be three consecutive 1,000-yard seasons.

In the championship game against the Chicago Cardinals, Philly’s defense came to play big time. That included holding Chicago to 126 total yards. Once Chicago lost a fumble on their end of the field, Van Buren scored from five yards out early in the fourth quarter for the only points of the game in a 7-0 Eagles win.

For the only time in franchise history, Philadelphia earned back-to-back championships to close out the 1940s. We put this team ahead of the previous iteration for multiple reasons. First off, the Eagles outscored their opponents by north of 19 points per game. They once again shut out their opponent in the championship game after accomplishing that feat the previous season. This time, it came via a 14-0 destruction of Elroy Hirsch and the Los Angeles Rams.

How good was this Philadelphia Eagles team? Its final five opponents, Los Angeles in the aforementioned championship game included, were outscored by a total margin of 131-23. That seems pretty damn good.