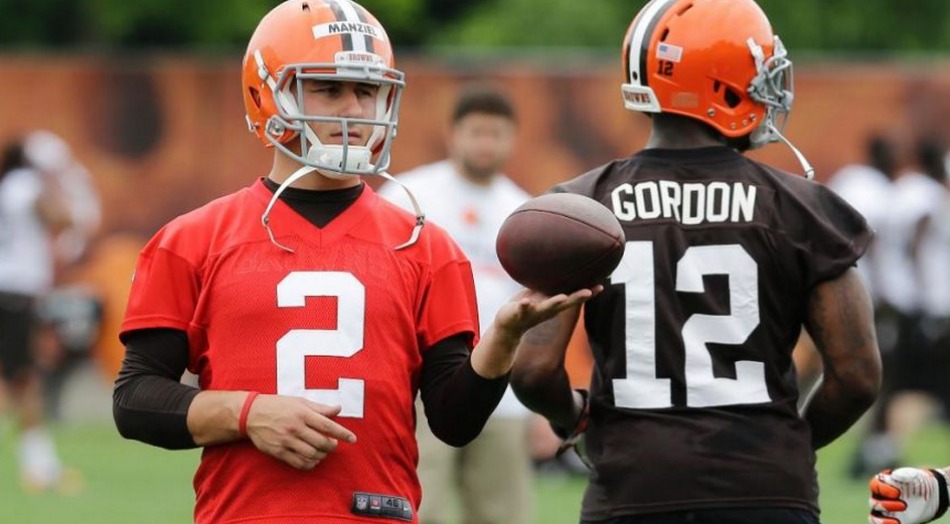 Remember when the NFL actually had an offseason? It seems like such a long time ago. With teams slated to take part in their first workouts of the spring this month and the NFL draft mere weeks away, things will again start to heat up around the league.

Before we get to yet another crazy part of the offseason, let’s check in on the biggest takeaways from the past week around the NFL.

1. The Dallas Cowboys Window for Contention is Right Now

By virtue of restructuring Tony Romo’s contract, Dallas is continuing to put itself in a less-than-stellar long-term cap situation. With $32 million in dead money on Romo’s contract after this season, the Cowboys are obviously in win-now mode. That’s only magnified by Dez Bryant’s contract situation.

The issue here is that Dallas has taken a step back from last season. Replacing DeMarco Murray with Darren McFadden isn’t necessarily an ideal scenario. Based on Romo’s restructure, talks have heated up that Dallas will make a renewed play for Adrian Peterson. Short of that happening or the team finding a gem at running back in the upcoming draft, Dallas will find itself in a dog fight for the NFC East title with the Philadelphia Eagles and New York Giants. This leads us to believe Jerry Jones and company would be smart to push for Peterson.

2. Top Draft Prospects Not Attending the Event in Chicago

With both Marcus Mariota and Jameis Winston unlikely to attend the draft later this month, there seems to be a trend towards prospects deciding to spend the most important day of their lives with family. Mariota is going to be in his home state of Hawaii, which is pretty awesome considering he will be the highest-drafted Hawaiian-born player in league history. As it relates to Winston, he’s seriously contemplating spending draft weekend with family in Alabama. His grandmother has Type 2 Diabetes and cannot travel. In addition to these two, Minnesota tight end Maxx Williams also passed up on an invite.

We already know that Rams owner Stan Kroenke is hedging his bets that the Inglewood plan will work out in Southern California. By now the story is already well known. Kroenke owns the necessary land to build a stadium at the Hollywood Park location. The Inglewood city council also approved a plan to build a NFL venue on that land—a plan that indicates ground-breaking will take place later this year.

Now comes this bit of information from Missouri Governor Jay Nixon, who publicly mentioned the fact that no public funds will be used to build a new stadium in St. Louis. While the plan is to find a way to get private funding, we already know how that’s worked out in the past. Without public funds and with Kroenke being asked to fund a majority of the project, he now has even more right to claim Southern California as his own.

4. NFL Players Putting Their Foot in Their Mouths

It started with Dallas Cowboys quarterback Tony Romo inexplicably setting himself up for criticism by indicating that both Greg Hardy and Ray Rice deserve second chances. And it continued with Jacksonville Jaguars defensive tackle Sen’Derrick Marks telling the world that he believes the Rams selection of Michael Sam was a PR stunt. The young man also threw some shade the NFL’s way by calling the league’s hiring of Sarah Thomas as the first female official a PR stunt. It’s a slow time of the year for players, but they might just want to take a step back and remain quiet when it comes to certain things happening around the league. They are free to voice their opinions, just as we are free to question said opinions.

5. Jets Looking for a Quarterback, Willing to Trade Up

The New York Jets don’t appear to be terribly excited about the prospect of going into the 2015 season with Geno Smith and Ryan Fitzpatrick competing for the starting gig. New head coach Todd Bowles said this past week that the team is looking to add another quarterback in the upcoming draft.

This lines up with what new general manager Mike Maccagnan said this past week as well.

Sitting at six is a very good spot to be in. It does allow us the potential to move up in the draft because we’re not far from the first pick.”

It’s highly likely that the Jets target here could be reigning Heisman winner Marcus Mariota. The Tennessee Titans, who possess the second overall pick, could be a potential trade partner here. New York’s ability to trade multiple picks for a “franchise” quarterback became more realistic when the team added talent on both sides of the ball last month. Brandon Marshall gives the Jets a true No. 1 receiver, while Darrelle Revis and Antonio Cromartie form one of the best cornerback tandems in the league. If this team is able to get as much as adequate quarterback play, it could contend for a playoff spot in 2015. That’s where Mariota might come into play.

If only I could be Gronk for one day. From flirting with female reporters to hanging out in South Beach for spring break, the Patriots tight end is absolutely living it up. Heck, he even took to The Jim Rome Show to spike a pinata. No lie.

If you are looking to settle down with Gronkowski, be careful what you wish for. His idea of what a perfect wife would look like is pretty much unattainable, even for one of the most popular players in the league. Oh, and he’s even pretty good at twerking. So there’s that. Let’s just hope Gronkowski saves some of his energy for actually playing football. Then again, his new role as a cop in a Hollywood flick may just be the start of another career path.

7. Johnny Manziel Might not be in the Cleveland Browns’ Plans

When Manziel returns from rehab later this month, his stay with the Browns may be short-lived. ESPN’s Chris Mortensen put it at a 90 percent likelihood that the team has already moved on from the 2014 first-round pick. And with two first-round picks later this month, Cleveland may decide it makes sense to move up for Oregon’s Marcus Mariota or trade for current Philadelphia Eagles signal caller Sam Bradford. Even if that doesn’t happen, general manager Ray Farmer and company are seemingly done with Manziel.

What does this all mean? Whether the Browns commit to moving on from Manziel will likely be known within the next month. If they do add a quarterback either through the draft or a trade, Manziel could be traded during the draft itself. Though, it’s important to note that he’s probably not worth a whole bunch on the trade block.

Regardless of what Sen’Derrick Marks thinks, the NFL did make history this past week by hiring Sarah Thomas to be the league’s first female official. Thomas, who has experience at the college level, broke the glass ceiling for her gender in this sport. And it’s a really nice story. It will also be interesting to see how players react to her, especially considering the machismo culture in the league today.

9. Some Major Decisions for the Two-Time Defending NFC Champions

We analyzed a report this past weekend that indicated star linebacker Bobby Wagner is seeking between $8 and $10 million annually—figures that would make him among the highest-paid inside linebackers in the NFL. This comes on the heels of reports that the Seattle Seahawks may have to wait until after the 2015 campaign to extend Russell Wilson, who is expected to receive a record deal.

Seattle’s cap situation isn’t necessarily too bad for the short term. It’s currently $12.3 million under the cap. With the $5 million most teams like to take into the season and Seattle having to pay its rookie class, the team is really about $5.5 million under the cap. In order to extend Wagner with a decent 2015 salary, general manager John Schneider may have to rework some deals or release a player. With a cap hit of $7.3 million next year, defensive tackle Brandon Mebane may be the odd-man out in Seattle.

Moving forward, Seattle has a nice amount of cap money tied up to just a few players. Richard Sherman, Marshawn Lynch, Earl Thomas and Jimmy Graham are slated to count a combined $45 million against the cap in 2016. In order to fit both Wilson and Wagner into the equation, Schneider will have to get creative here.

There’s no way San Diego trades Rivers, right? After all, we are talking about a franchise signal caller that’s among the 10-best players at his position in the NFL. However, the dynamics are intriguing here. Rivers has indicated that he’s unwilling to sign a long-term deal prior to next March. That puts the Chargers in the unenviable position of having to either franchise Rivers or face the real possibility of losing him in free agency.

With the team set to meet with Oregon’s Marcus Mariota in the lead up to the draft, rumors continue to swirl that the Chargers may very well have Rivers on the block. If that’s the case, the Tennessee Titans—picking second overall in the draft—become a real option.