Zach LaVine is having a typical season for his recent standards. He’s leading the way for the Chicago Bulls in the form of being an electric scorer who produces at an All-Star level. What’s different about this year for LaVine? He’s doing it on a winning team.

LaVine’s Bulls are 17-8, which is good for the second seed in the Eastern Conference. That’s unfamiliar territory for this team of late. The Bulls’ early success this season is similar to Devin Booker’s 2020-21 campaign, where he and the Phoenix Suns were the two seed in the Western Conference and went to the NBA Finals after years of misery.

Related: Find out where Zach Lavine ranks among NBA players

A year ago, the Suns had a nucleus of young players that simply couldn’t make headway in the West. They had a handful of productive individuals but collectively struggled defensively and were one of the worst teams in the conference on a yearly basis. One could’ve argued that Booker, the face of the franchise, was a great player who was putting up empty numbers on a lacking Suns’ team. Then last season happened.

Phoenix made the bold decision to acquire Chris Paul from the Oklahoma City Thunder, forming a potent backcourt with the veteran floor general and Booker. They didn’t disappoint. Phoenix became a sturdy defensive team who was efficient in the halfcourt, offensively. Everything fell into place for the Suns. They won the West and looked poised to win the NBA Finals before a heartbreaking 2-0 series collapse.

Booker’s production didn’t spike in the regular season. It was about the same as years past. What made his play distinct was that he had a fellow scorer and shooter by his side who had been there, done that in Paul. It took some attention off Booker, as teams had to focus on both players.

Booker looked possessed in the playoffs — in a good way. He was fearless in his shot selection, money in the halfcourt and played like a superstar. In the past, there was reason to doubt whether Booker could be the best player on a championship team. There simply wasn’t enough evidence to prove he wasn’t merely a great player putting up MVP numbers on a bad team.

If one is going to rank the 10 best players in the sport, Booker is likely on that list. There aren’t any questions about his game. The production and talent have matched the impact.

Last offseason, LaVine was one of, if not the best player in the NBA without a playoff appearance. He has been a highly productive player whose Bulls’ teams had either been rebuilding or didn’t make a jump in the standings with him present. With LaVine a year away from free agency, Chicago made a pair of significant transactions in adding DeMar DeRozan and Lonzo Ball. These moves came after the Bulls traded for big man Nikola Vucevic at last season’s NBA trade deadline. These players have a hand in LaVine’s success this season.

Head coach Billy Donovan has two and maybe three players he can turn to for a bucket at the end of games. Donovan and the coaches before him previously had one, and that was LaVine. The guard’s production is the same this season. What sets it apart is that he isn’t doing it alone.

At the moment, an empty numbers argument or proposition that LaVine can’t be a leading scorer on a contending team are out the window. The Bulls got a proven commodity and someone accustomed to high-leverage situations in DeRozan, and it makes life easier for LaVine.

Of course, the Bulls haven’t done anything yet, as it’s still just December. That said, this team has been consistently vibrant and is showing no signs of slowing down. They’re leaning on a young star who looks different in that he’s taking over games and not simply leading the Bulls in scoring.

LaVine’s heroics are contributing to wins, not moral victories.

Zach LaVine and Devin Booker are on similar career paths

LaVine and Booker have been stud scorers for the better part of their NBA careers. It didn’t take long to see that they each had star potential. The production began to back that notion. Now their impact on a winning team is doing the talking.

Chicago and Phoenix have put their young stars in optimum environments. They’re around players who have played in the spotlight and high-leverage situations. They can seek perspective from the veteran scorers alongside them, especially in LaVine’s case. 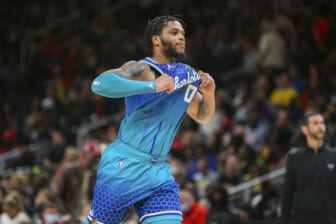 LaVine is 26, and Booker is 25. Ironically, they were both the 13th selection in their respective draft classes after playing one season of college basketball. Neither one of them has entered their prime. They continue to get better and are going to be one of the premier players of their conferences — barring free agent departures — for the next five-plus years.

Booker just had his standout season which included the Suns nearly winning the NBA Finals. LaVine and the Bulls are on a similar path and seeing their commitment and/or patience with a young star pay off.