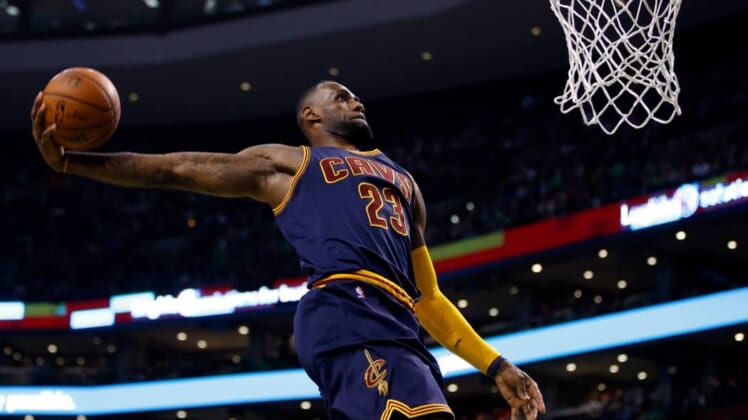 Despite some popular opinions, yoga isn’t just performed by a bunch of women showing off the latest fashion trends in ladies’ activewear. Yoga can be a demanding test of physical endurance when faced with holding challenging or balancing postures (asanas) for long periods of time.

Because of this, yoga is practiced by many professional athletes and entire teams for the purpose of improving flexibility, endurance, core strength, and balance. It also provides many benefits such as breathing techniques that can aid in relaxation, mental and spiritual clarity, and focus.

Able to be practiced in the natural comfort of a beach or park or in a heated and humidified studio that can range anywhere between 90-105 degrees, yoga has helped many athletes remain in top physical and mental condition.

Performing Bikram (or hot) yoga in a studio topping out at 105 degrees, Joe Johnson had been known to practice a couple of hours prior to hitting the court, per Jordan Schultz of The Huffington Post.

This seven-time All-Star officially retired as a Boston Celtic in 2021 after he last played for Houston Rockets in 2017/18. Johnson’s illustrious NBA career spanned 20 seasons, and he has been practicing yoga for many years now.

Aaron Rodgers joins the growing bandwagon of NFL quarterbacks who intend to play the sport after they cross the 40-year old threshold.

Part of Rodgers’ health regime, which includes eating less pizza and getting more shut-eye, is practicing hot yoga. According to Lori Nickel of The Journal Sentinel, Rodgers practices for 60 minutes in a 90-degree studio set at 40 percent humidity which keeps him detoxified.

“I’m really there for my flexibility. That’s helped. But I think through yoga you learn some good mental disciplines, being encouraged to try and clear your mind. I think those are good mental activities, to turn your brain off, focusing on those moments.”

Rodgers, at the age of 38, is a 10-time Pro Bowler, four-time All-Pro, and 2010 Super Bowl MVP. He has also earned Offensive Player of the Year honors twice and is a four-time NFL AP MVP.

At 6-foot-9 and 250 pounds, LeBron James has reportedly been practicing yoga for years while playing with the Miami Heat, Cleveland Cavaliers, and LA Lakers, according to Brian Windhorst of The Plain Dealer.

James explains that yoga not only helps him with his balance but that it has helped ease some lower back issues.

“It is something that really can help your balance. I had some lower back problems a few years ago and once I started to do the yoga, it has helped them go away for now. Of course we can stretch but stretching only goes so far.”

Just recently, James took to the sand to teach yoga to Pro Basketball’s Next Generation in coordination with Pilgrimage of the Heart Yoga.

As part of the Seattle Seahawks physical fitness plan, the team reportedly practices yoga as what is now a mandatory portion of the team’s workout, according to Alyssa Roenigk of ESPN.

What started out as voluntary meditation sessions when about 20 players would participate, head coach, Pete Carroll has since incorporated full yoga sessions because the players enjoyed it so much, per the report.

“We talk about being in the moment and increasing chaos throughout practice, so when I go into the game, everything is relaxed.”

Considering Wilson is still playing at a high level — enough so that the Broncos traded a ton of loot to acquire him — keeping yoga as part of the fitness schedule appears to be working.

Arriving to spring training with the hope to regain his zest and approve upon last season’s numbers, Evan Longoria plans to return to his yoga practice.

“I think there was maybe a little something missing there for me,” he said according to Marc Topkin of tampabay.com. “Whether it was flexibility wise or just maybe the little added whip or core strength or whatever it was that yoga (provided).”

In a report from 2012 written by stack.com, Longoria became an active yogi because he said that the practice helped both stabilize his core strength and provide peace of mind.

Longoria is now in career year No. 14 and his fourth season as a Giant after spending 10 years with the Tampa Bay Rays.

Smith last played with the Carolina Panthers in 2018. And, during his overall eight-year career in the NFL, Smith could be spotted in the yoga studio working on his flexibility, balance, and spiritual well-being.

“Yoga is hard,” said Smith per Jordan Schultz of The Huffington Post, who practices yoga two or three times a week in the offseason. “It is some kind of workout. It’s helped a lot. I’ve definitely benefited from the mental aspect of it.”

Smith spent four seasons with the Baltimore Ravens before signing with the 49ers last spring. As a wide receiver, no one knows better than Smith the balance and core strength it takes to remain firmly planted in the end zone on a touchdown catch.

Kevin Love reportedly practices yoga to open up his hips and build on balancing and core strength according to Jamie Lisanti of Sports Illustrated.

“Yoga has given me a newfound balance, strength and endurance. And my body has leaned out because of it.”

Love’s instructor Kent Katich explained how yoga helped firm up the star power forward coming out of college, per Lisanti.

“Kevin is a good role model for hard work—he came out of college a little soft, with a little baby fat, but he wanted to build strength and lean down. All of those goals fit into this package with yoga and it spoke to him.”

Since college, Love, an All-Star, spent six seasons with the Minnesota Timberwolves before playing his last eight years as a member of the Cleveland Cavaliers.

Keith Mitchell’s NFL career came to an abrupt ending in 2003 when he sustained a severe spinal injury on what was considered a routine tackle at the young age of 29.

As a means of treatment while temporarily paralyzed, Mitchell was introduced to the breathing and meditation aspects of yoga. Mitchell, now in his mid-forties, teaches yoga to current and former NFL players with a focus on the spine, according to Andrea Rice of mindbodygreen.com.

His experience in working with NFL players, military veterans, and kids allowed Mitchell to take his teachings right up to the White House, per the report.

“I really like to get into some of these poses to circulate the blood flow and move it along. When you’re sitting at work or in long meetings, your back gets locked up and compressed. These openings will help create space in the lower back, hamstrings and glutes, even if these muscles are highly developed.”

Mitchell is a prime example of taking advantage of an adversity that he was dealt and turning it around to spread positive to the world.

And, that’s an amazing dolphin handstand Mitchell is demonstrating.

Part of what keeps the Los Angeles Clippers’ players in excellent athletic shape is having a “yoga coach.” That coach is Kent Katich, who also works with other NBA players including Kevin Love (mentioned above).

Katich reportedly is the only yoga instructor who works full-time for an NBA team as far as he knows, according to Maria Burns Ortiz or ESPN.

Former Los Angeles Laker Jordan Farmar who spent one season with the Clippers had this to share about his introduction to yoga when he attended a Katich retreat in the South Pacific in 2008.

“I thought it was something that girls did. It couldn’t hurt, and if I didn’t like it, well, I still got to go on a nice trip and see what Tahiti was like.”

Calvin Johnson undeniably was one of the best wide receivers in the NFL. Part of what kept him in such amazing athletic condition was hitting his yoga mat on a regular basis.

Speaking on his preference for yoga as a workout, Johnson shared this via Michael Rothstein of ESPN.

“Whatever I’m feelin’. If I need to work on my hamstrings, if I need a full body deal or work on the hips, whatever needs work. I’ve done it for years. I’ve definitely seen a positive impact from just being loose in my hips, my hamstrings, you know.”

After contemplating retirement, this six-time Pro-Bowler and three-time All-Pro finally did hang up his cleats in 2015.

Next adventure? Perhaps we’ll see Johnson take to the instructing side of yoga.