The Aaron Rodgers will-he-or-won’t-he saga is over. He has signed a new contract with the Green Bay Packers that will make him the highest-paid player in NFL history.

On Tuesday morning, popular podcast host Pat McAfee tweeted the news that he had been told by “sources” that his close friend and a regular guest on the show had decided to return for at least another season with the only organization he has ever played for, the Packers.

“According to my sources.. Aaron Rodgers will officially be returning to the Green Bay Packers,” McAfee wrote. “There is no deal in place currently but there is said to be a Cap Friendly deal on the way. Retirement was a real consideration & in the end.”

However, soon after McAfee’s tweet NFL Network insider Ian Rapoport reported the details of the new pact between Rodgers and the Packers, and it is one that will make the 38-year-old the richest player in the NFL.

“The Packers and MVP QB Aaron Rodgers have agreed to terms on a 4-year, $200M deal that makes him the highest paid player in NFL history, sources say,” Rapoport wrote. “He gets a whopping $153M guaranteed and his cap number goes down. A monstrous commitment by GB for years to come.”

Reports in February claimed that last season’s NFL MVP was looking for a new deal in the range of $50 million annually. A contract that would make him the highest-paid player in the sport. Well, it seems like those claims were true, and the four-time MVP will surpass Matt Ryan’s $48.6 million salary from last year by a solid amount.

Rodgers making his decision was timely because at 4 PM ET on Tuesday, teams must decide on the use of franchise tags or allow unrestricted free agents to hit the open market. Star wide receiver Davante Adams could become a free agent today or be forced to play one more year for at $18.4 million. The franchise value for wide receivers in 2022.

Going into Tuesday, the Packers were $26.4 million over the salary cap. It is unclear how the $153 million guaranteed to Rodgers, that Rapoport reported, will bring that number down and if it will allow them to retain Adams with the franchise tag or a new deal all togehter. 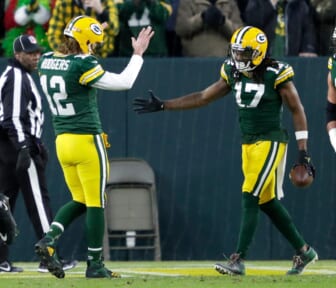