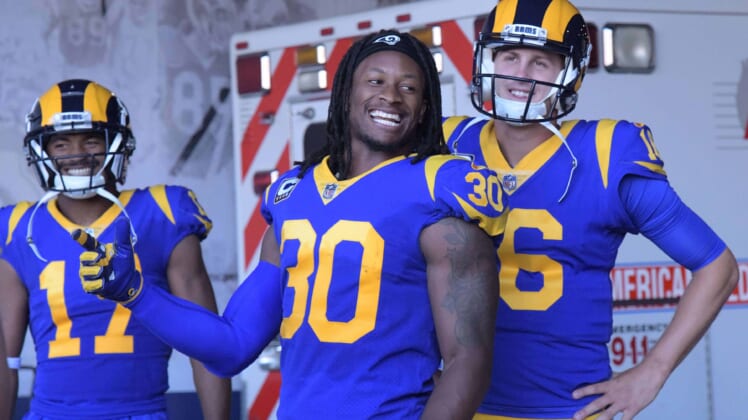 NFL fans were treated to a highly entertaining and competitive game between the Minnesota Vikings and Los Angeles Rams Thursday night.

Both teams boast Super Bowl aspirations. For their part, the Vikings were coming off a surprisingly blowout loss to Buffalo. Los Angeles entered Thursday’s action with a 3-0 record and having blown out its first three opponents.

With the backdrop of an electric atmosphere in Southern California, the home team came out by the score of 38-31. Jared Goff played lights out football. Todd Gurley continued to do his thing. Cooper Kupp was extraordinary. On the other side, Kirk Cousins did whatever he could do to keep the Vikings alive. Meanwhile, both defenses were downright horrible.

These are among the top winners and losers from the Rams’ fourth consecutive win to start the season.

It’s not too often that we get a Thursday Night Football game that actually lives up to the billing. Interestingly enough, the Rams have now been involved in two such games over the past season-plus. Their last mid-week game came against the San Francisco 49ers early last season, resulting in a 41-39 win.

This time around, the Rams entered Thursday’s game with a perfect 3-0 record. Los Angeles Coliseum was popping with both Rams and Vikings fans. The scene was surreal. It had to make the NFL happy. And in the end, fans were treated to one highly-entertaining game. It’s no small thing, especially given these mid-week games usually leave a lot to be desired.

There was not a pressure to be had in this game from the Vikings defensive front seven. There’s a reason why Jared Goff tossed for 465 yards. He had a clean pocket to toss the rock from. Minnesota had somewhat of an excuse with Everson Griffen being away dealing with personal issues. Even then, its defensive line was absolutely nowhere to be found inside Los Angeles Coliseum on Thursday night.

All said, Goff was sacked one time. He was hit on 2-of-36 dropbacks while tossing five touchdowns. We can blame the secondary all we want. But this was just ugly to watch from the standpoint of a defensive mind.

What Goff did against a previously dominant Vikings defense Thursday night was nothing short of amazing. Here’s a dude that connected on first half touchdowns to Cooper Kupp (twice), Todd Gurley and Brandin Cooks. The four scores went for a combined 144 yards, Goff displaying pinpoint accuracy in the process. Before the second quarter had concluded, the third-year signal caller completed 13-of-17 passes for north of 250 yards en route to leading the home team to a 28-20 halftime lead.

While the Rams cooled down a bit in the second half, Goff was still out there tossing the rock all around the stadium. He led Los Angeles on two long scoring drives to help the team to victory. All said, Goff completed 26-of-33 passes for 465 yards with five scores and zero interceptions.

Burnt twice for touchdowns throughout the evening, Barr’s issues in pass coverage came out in front of a nationally televised audience. It started with him getting destroyed on Cooper Kupp’s 70-yard touchdown in the first half. Then, after his Vikings had pulled to within one score, a Barr missed tackle on Robert Woods went for yet another touchdown.

Sure some of this is schematic. We get that. There was some sort of blown coverage pre-snap on the Kupp touchdown. Even then, Barr proved that he can’t cover in space. It’s something Vikings defensive minds are going to have to deal with moving forward. We’re sure Mike Zimmer and defensive coordinator George Edwards will recognize this on tape.

Cousins and the Vikings drew first blood Thursday night after the quarterback hit Aldrick Robinson on this touchdown to open up scoring. Cousins would then throw another first half score to Robinson. Despite this, it became clear that he would have to play from behind once again. It was almost a carbon copy of last week’s loss to the Buffalo Bills.

Heading into the second half down by eight points and with no running game to speak of, Cousins had to toss the rock 50 times in the loss. In the process, he threw for 422 yards and three scores. Unfortunately, a lost fumble late in the game concluded a first quarter of the Vikings season that will result in just one win.

Harrison Smith got confused on Cooper Kupp’s first touchdown of the night. Rookie Mike Hughes and fellow former first-round pick Trae Waynes failed to break up a pass intended for Kupp in the end zone later in the first half. Meanwhile, Xavier Rhodes was nowhere near the dominant force we had seen in the past prior to exiting to injury.

All of this led to a previously elite Vikings secondary yielding what was an absolutely huge performance from Goff in Minnesota’s third consecutive game without a win. Something needs to change here, and fast. Because, this performance was about as ugly as it gets from the Vikes’ secondary. It’s that simple.

We’re really intrigued to see what explanation the Vikings have for sending Anthony Barr in coverage to Cooper Kupp immediately prior to the receiver’s 70-yard touchdown in the first half Thursday. Harrison Smith might have missed an assignment. But Kupp took full advantage. Then, later in the first half, he caught this absolute dime from Goff for yet another score. Before the first half was even over, Kupp had caught 6-of-7 passes for 129 yards with those two scores. That yardage number actually represented a career high.

The Eastern Washington product was nowhere near done. His connection with Goff continued to take off in the second half, with Cupp finishing the evening having put up 162 yards. It was a coming-out party in front of a packed home crowd on national television.

The onus was on defensive coordinator George Edwards to offer up a better game plan than we saw last week against Buffalo. Missing Everson Griffen certainly hurt in this one, but the Vikings’ scheme was a downright disaster. And in the end, the blame goes to a defensive-minded head coach in Mike Zimmer.

When the Vikings blitzed, Los Angeles offensive line picked up it. When the team decided to go with man on the outside, Goff ate the secondary apart. Heck, Minnesota even attempted nickel at some points throughout the game. The end result? Goff having success on short-to-intermediate routes. We’re not sure what the overriding issue is here. But it needs to be fixed if the Vikings have any hopes of rebounding from a sluggish first quarter of the season.

With his team down 31-20 late in the third quarter, the Vikings needed someone to step up. That’s exactly what this stud receiver did, pulling Minnesota within three points after this brilliant 45-yard touchdown catch from Kirk Cousins.

Prior to that, Thielen had burned an injury Marcus Peters throughout the night. Ultimately, he finished the evening with eight catches for 135 yards and that touchdown in helping Minnesota stay close. While it wasn’t to be for the road team, Thielen continues to prove himself among the game’s best receiver. Through one quarter of the season, he’s on pace for 160 receptions and nearly 1,900 yards. Whew.

It’s rather clear that Peters was nowhere near 100 percent heading into Thursday’s game. Remember, he was just a few days removed from suffering a calf strain in Sunday’s win over the Chargers. Highly questionable going in, Peters looked nothing like himself. He was continually beat by Adam Thielen throughout the evening.

This begs one major question. Why did the Rams risk further injury to Peters by playing him on a short week? The team had just placed fellow cornerback Aqib Talib on injured reserve. A serious injury to Peters could threaten to derail their entire season. It was highly questionable from the get.