Winner, Loser and Storylines From Day 1 of 2015 NBA Free Agency

At the moment the clock struck midnight Wednesday morning on the East Coast, the NBA ripped off its business attire and unveiled its party outfit. It took but a minute for things to get crazy.

New Orleans Pelicans power forward Anthony Davis agreed to the richest deal of the day—and in NBA history. He will sign a five-year, $145 million contract, per Adrian Wojnarowski of Yahoo Sports.

Throughout the ensuing hours, players reached big-money agreements with current and new teams around the league. Even after just one day of free agency, a clear winner, loser and handful of important storylines have emerged from the 24 hours of madness. 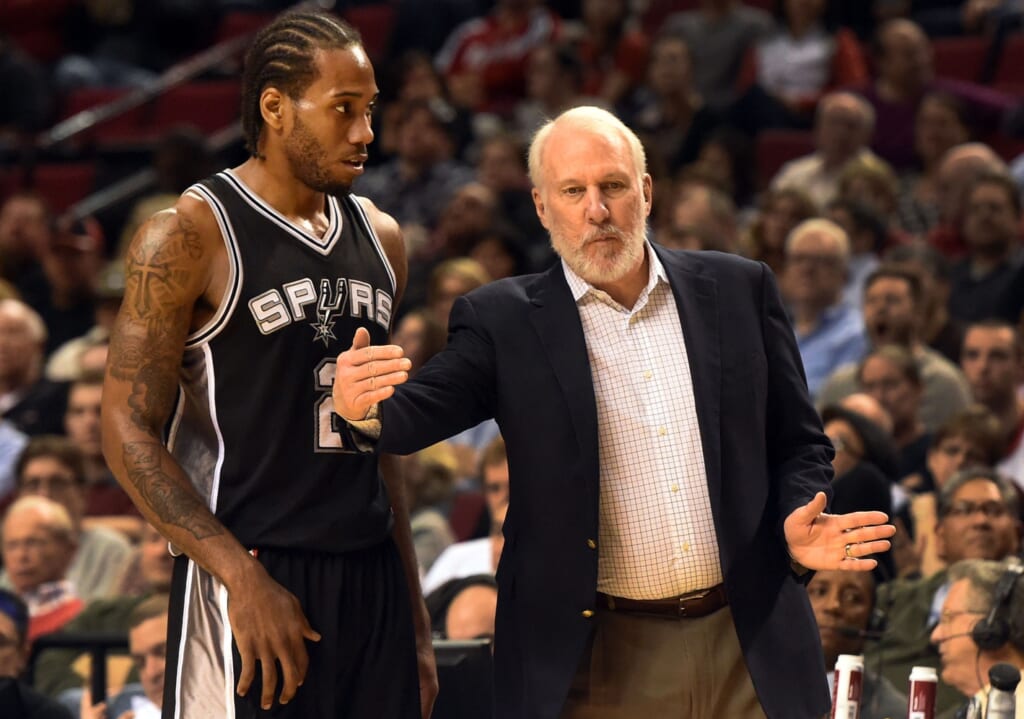 Just six minutes after free agency officially began, Adrian Wojnarowski of Yahoo Sports reported that Kawhi Leonard and the Spurs “have agreed to the framework” of a five-year that could be worth more than $90 million.

The entire NBA knew Leonard was San Antonio’s first priority, so the contract was no surprise. But in the late-morning hours, craziness ensued.

ESPN’s Chris Broussard broke the news that the team agreed to a four-year, $45 million deal with Danny Green. Then 18 minutes later, Wojnarowski dropped another absolute bomb: the Spurs traded Tiago Splitter to the Atlanta Hawks.

We Don’t Care About the Luxury Tax: Cleveland Cavaliers

The Eastern Conference champions must have found the money tree, because the Cavaliers are spending like they have an unlimited supply of cash.

Oh, and Cleveland still needs to sign LeBron James, who figures to command $22 million for the 2015-16 campaign.

Though the team is expected to trade Brendan Haywood and his non-guaranteed $10.5 million deal, the Cavaliers will soon explode past the salary cap and into the luxury-tax threshold. Nevertheless, the front office appears ready to pony up the cash in hopes of a championship.

Phoenix opened the day by signing Brandon Knight to a five-year contract worth $70 million, per Wojnarowski, which was an unsurprising move.

But Woj’s next announcement was a shocker: the Suns added a former Defensive Player of the Year in Tyson Chandler. Rob Mahoney of Sports Illustrated writes Chandler’s signing is a calculated risk that could pay large dividends:

“Chandler positions the Suns to be a better version of what they were. A mobile big of his mold should only augment what players like Eric Bledsoe, Brandon Knight, and Markieff Morris already do best.”

Phoenix doled out its remaining cap space to Knight and Chandler, effectively eliminating itself from the Aldridge sweepstakes. However, if the latter signing pays off, the Suns could overcome a tremendously tough Western Conference and reach the postseason. 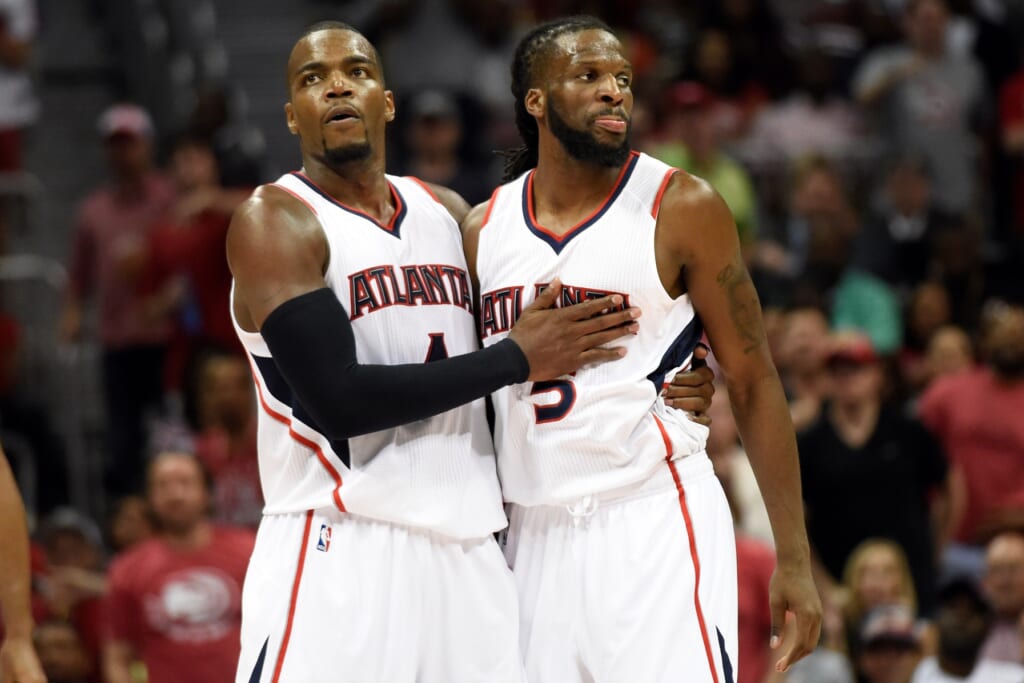 The team acquired Splitter for essentially nothing, and he could be a terrific defensive-minded reserve. Splitter is a stout rim-protector and can contribute as the roll man in Atlanta’s screen-heavy offense, but he lacks shooting range and must rebound from an injury-riddled campaign.

More importantly, though, the Hawks avoided losing a pair of starters that the center would do little to replace.

DeMarre Carroll bolted for the Toronto Raptors, and Paul Millsap received a four-year, $80 million offer from the Orlando Magic, per ESPN’s Chris Broussard. The Hawks matched Orlando’s contract figures, and Millsap chose the proven roster over a high-potential squad.

Had Millsap left for Orlando, the Hawks’ 2015-16 ceiling would’ve been an early-round exit in the postseason.

Monta Ellis and Rajon Rondo are both almost certainly on their way out of Dallas, which is neither a surprise nor a massive problem. Wojnaroski noted the Indiana Pacers are pushing for Ellis, while Sam Amick of USA Today wrote the Sacramento Kings have contacted Rondo.

Additionally, Al-Farouq Aminu bolted for the Portland Trail Blazers and a $30 million contract over four seasons, per Wojnarowski, but that loss isn’t a franchise-killer. What emerged as an issue, though, is the Mavericks missing on their remaining free-agent targets.

Mavs now head into their meeting with LaMarcus Aldridge. Feels like equivalent of running out a ground ball to second base.

DeAndre Jordan, Wes Matthews, Robin Lopez and Patrick Beverley are still available, but the Mavericks cannot afford to strike out across the board. Otherwise, next season, Dallas will almost assuredly post its first losing record since the 1999-2000 campaign.

The Nets must upgrade their roster in order to be competitive. Nevertheless, Brooklyn re-signed Brook Lopez to a three-year, $60 million contract and Thaddeus Young to a four-year, $50 million deal, per Wojnarowski.

Unless the front office locates a trade partner for Joe Johnson or Deron Williams, the Nets will be on the hook for nearly $90 million in 2015-16, which is more than $20 million over the salary cap.

Consequently, Brooklyn’s biggest offseason move would be losing shooting guard Alan Anderson. Despite spending into the luxury-tax threshold, the Nets merely reaching the 2016 playoffs should be the peak expectation—a remarkably sad, expensive failure. 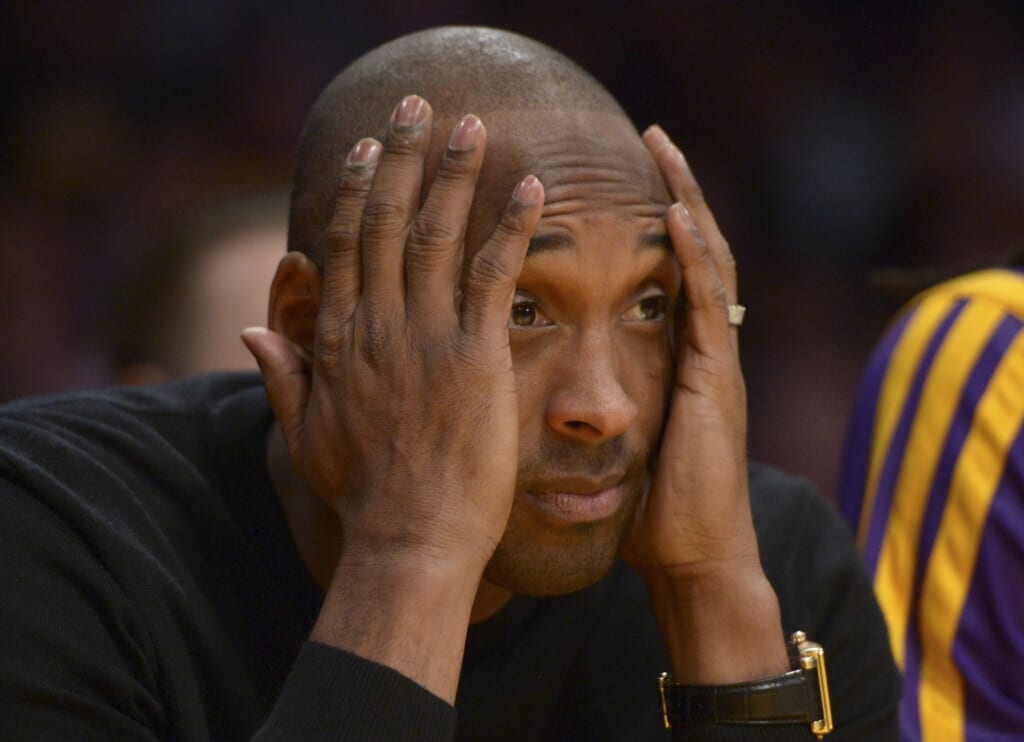 Courtesy of USA Today Images: It wasn’t a good day for Kobe and the Lakers.

The three-headed monster of tradition, locale and Kobe Bryant apparently is no longer enough to entice high-profile free agents to join the legendary organization.

Mike Bresnahan of the Los Angeles Times writes Aldridge disliked the basketball portion of the team’s presentation and will not sign. Brad Turner of the Times notes LA’s presentation to Jordan was “underwhelming.”

Since Aldridge has reportedly moved on and adding Jordan seems unlikely, Los Angeles must rely on its pair of young talents in Julius Randle and D’Angelo Russell to resurrect the team. However, with 14 minutes of combined NBA experience between the duo, don’t expect much improvement from the Lakers next season.