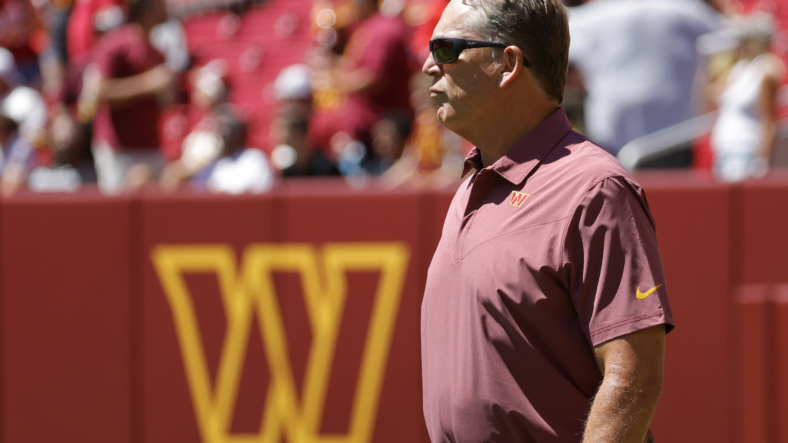 Washington Commanders head coach Ron Rivera stuck by defensive coordinator Jack Del Rio after a disastrous 2021 season. He also kept Del Rio around after many, including the NAACP, called for the defensive coordinator’s firing after his comments on Jan. 6 attack on the U.S. Capital. Sunday’s loss to the Detroit Lions should be the final strike for Del Rio.

It goes beyond simply losing the game, Washington is likely to suffer plenty of losses this season. Instead, this is about a unit that fails to do even the basic fundamentals and is routinely exposed by any above-average talent or quality play-caller that faces Del Rio. The COmmanders allowed 20 offensive points before there were even 6 minutes left in the second quarter and Detroit finished with 36 points and 425 yards on the day.

This also isn’t a reaction to a single game. After boasting one of the best NFL defenses in 2020, this group has progressively got worse ever since. Coordinators are hired to put their players in the best position to succeed, make the most out of the talent on the roster and not causing problems for the head coach.

In every way you look at it, Del Rio has fallen short of his duties and change is necessary for the Commanders.

Washington’s front office is far from infallible. Part of the reason this has been one of the worst teams in the NFC for so many years – zero playoff wins since 2006 – is the decision-making at the top. However, Del Rio can’t make an argument that he doesn’t have the personnel or the necessary commitment from the franchise to make things work.

The Commanders spent first-round picks in 2017 (Jonathan Allen), 2018 (Daron Payne), 2019 (Montez Sweat) and 2020 (Chase Young) on their defensive front. While Young is currently recovering from a torn ACL, it’s fair to say Washington hasn’t missed on these first-round selections.

Payne (40 quarterback hits, 24 tackles for loss In NFL career) and Allen (76 quarterback hits, 33 tackles for loss in 71) games are two of the best players in the NFC at their position. Sweat (74 pressures from 2020-’21) has blossomed into a quality pass rusher and an above-average defender against the run (82.4 PFF run defense grade in 2021). When healthy, Young still has the talent to be a perennial Pro Bowl selection.

There are other significant investments on this side of the ball. Linebacker Jamin Davis, the 19th overall pick in 2021, is improving in his second season. Washington signed cornerback William Jackson III, a standout in 2020 with the Cincinnati Bengals, to a three-year contract worth $40.5 million.

Keep in mind with the above figures that Payne, Sweat and Young are playing on their rookie contracts. While Payne’s future is uncertain, Sweat is a free agent in 2024 with Young eligible for a contract extension next summer. Despite this, Del Rio seemingly can’t create an effective defense.

Two years ago, the Washington Commanders’ defense looked like a unit that could be one of the best in the NFL for several seasons. It seemed even more likely after Jackson III joined the secondary, rounding out a group that could do everything effectively. Instead, fans have witnessed a rapid spiral downwards.

Washington had it relatively easy to open the 2022 season, facing the Lions and Jacksonville Jaguars. While the Commanders only allowed 22 points in Week 1, it could have been far worse if Trevor Lawrence didn’t miss a wide-open Travis Etienne. Later in the game, Washington left Etienne open again in the flat and he dropped a walk-in touchdown

Fast forward to Week 2 and the results were even worse. Jared Goff sat back in the pocket and had no trouble dropping buckets into the large holes in the Commanders’ secondary. The Lions’ quarterback delivered one of the best games in his career, throwing four touchdowns with a 121.7 passer rating. It’s easy to do when a team consistently blows coverages and there is alarming communication issues.

Del Rio didn’t have the track record in 2021 worthy of keeping his job after his comments about the attack on Jan. 6, but Rivera kept him around anyways. There are no more excuses, Del Rio is failing as a defensive coordinator and change is desperately needed in Washington.