The Washington Commanders rewarded one of their best, young players in June with a lucrative contract extension. Unfortunately for defensive tackle Daron Payne, it seems he won’t be joining Terry McLaurin in the exclusive group of homegrown talent being rewarded.

Payne, a first-round pick in the 2018 NFL Draft, is in the final year of his rookie contract. While he isn’t viewed as one of the best NFL players in 2022, many believe he should soon become one of the highest-paid defensive tackles in football.

Drafted with the 13th pick out of Alabama, Payne has been a consistent force on Washington’s defensive line. He earned an above-average 67.3 overall PFF grade in his rookie season, recording 27 pressures and 34 stops.

Payne made improvements against the run, being credited with 37 stops and a career-best 74.0 PFF run-defense grade in 2020. While he took a step back as a penetrator against the run this past season, Payne balanced it out with his best season creating pressure on opposing quarterbacks.

All of this would seemingly bode well for Washington rewarding a key member of its defense with a lucrative contract extension. It seems especially important at a time when multiple NFL teams have expressed strong interest in him, a sign of what will happen if he hits free agency in 2023.

However, per Ben Standig of The Athletic, there are no indications in recent weeks that an extension is coming for Payne. Even after the McLaurin extension provided clarity on the Commanders’ long-term cap outlook, it seems Washington doesn’t have a desire to extend Payne right now. 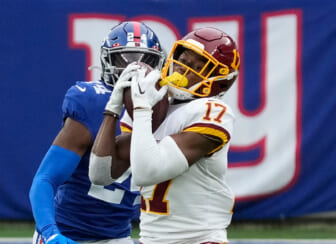 It’s a massive risk for the organization. With the NFL salary cap climbing, salaries are rising with it. While Washington could use the franchise tag on Payne in 2023, the value of the 2022 tag was $17.396 million for defensive tackles and it will soar again next offseason.

If Payne maintains his level of play, this could be his last season in Washington. Given the number of teams who were reportedly willing to trade draft picks for him and sign him to a long-term deal, his list of suitors will be even longer as a free agent. If he leaves, it will be a massive blow for the Commanders’ defense in the years to come.