Why the Arizona Cardinals offense isn’t as good as advertised

Despite expectations of greatness, the Arizona Cardinals offense could be one of the most disappointing stories of the 2015 season when it fails to live up to the hype.

On paper, before training camp, this offense looked amazing. General manager Steve Keim has assembled a phenomenal group of receiving targets for Bruce Arians and Carson Palmer, and the franchise has invested in the offensive line the past few years.

Joining long-time veteran Larry Fitzgerald are Malcolm Floyd, John Brown and rookie speedster JJ Nelson. Brown and Nelson have earned the nicknames “Smoke” and “Fire” for their ability to burn defensive backs deep down the field, and under the right circumstances will be amazing playmakers for the Cardinals. Additionally, tight end Darren Fells has been turning heads in training camp this year.

There are receiving options galore for Arizona this year—especially when Floyd returns from his hand injury.

However, the offensive line investments have already started to prove unsound, meaning 35-year old Carson Palmer, coming off an ACL injury, isn’t going to find comfort in the pocket this season.

Mike Iupati, the high-price veteran free agent who came over from the San Francisco 49ers, has always been a liability in pass protection. While he has been phenomenal at times in the power-run game, his inability to move his feet quickly when pass-blocking caused many busted plays for the 49ers the past couple of seasons. Pro Football Focus (subscription required) graded Iupati as the No. 65-ranked guard in the NFL last year in pass-blocking situations, allowing eight sacks, three quarterback hits and 22 quarterback hurries.

Keep in mind his quarterback, Colin Kaepernick, avoided many more sacks, thanks to his otherworldly athleticism. Palmer, coming off his second career ACL injury, isn’t half as athletic as Kaepernick and won’t be able to avoid pressure coming right up the middle. 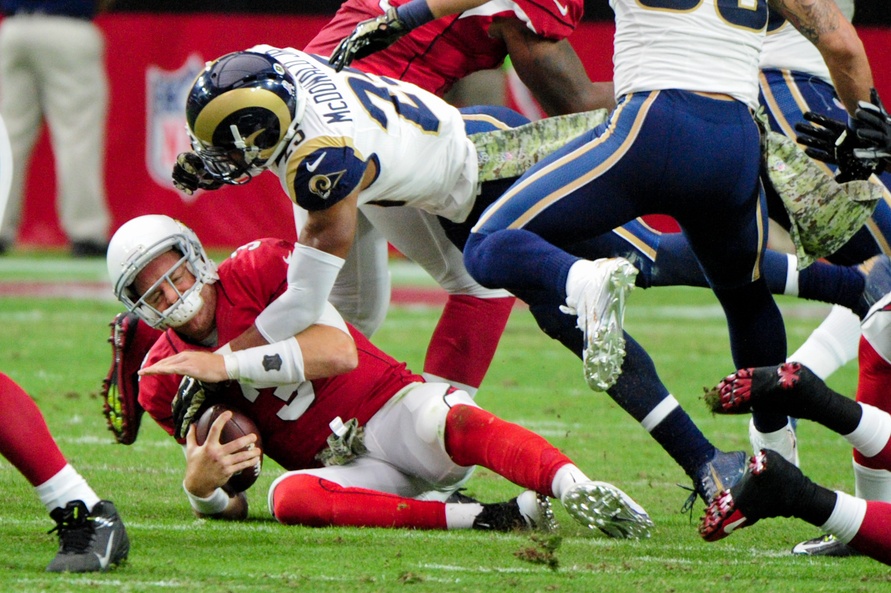 Making matters worse, Iupati is now going to miss the next six-to-eight weeks while he recovers from knee surgery.

Cardinals' LG MIke Iupati is likely to undergo arthroscopic knee surgery this week that would sideline him 6-8 weeks, per source.

The Pro Bowl guard has struggled with health issues the past two seasons, and it’s disconcerting that he has another leg injury to overcome already, before the 2015 campaign has even begun.

In addition to Iupati’s absence to start the season, Arizona will play without right tackle Bobby Massie for the first three games. Massie was suspended for three games due to a violation of the NFL’s Substance Abuse Policy.

Making matters worse on the offensive line is the fact that the Cardinals were recently forced to re-sign veteran center Lyle Sendlein because A.Q. Shipley and Ted Larson couldn’t get the job done. Just to help you understand what a disastrous situation this is, Sendlein graded out as the No. 40-ranked center in the league by Pro Football Focus last year—out of 41 qualified centers.

The center position is vastly underrated by most average fans, but without a good one, the offensive line is doomed.

And just to make things even more fun for the Cardinals this year, along with a porous offensive line that won’t come anywhere close to cohesion for the next month or two, this team’s running backs continue to disappoint.

Andre Ellington has missed significant time due to injury his first two years in the league and has already been dinged up in training camp. 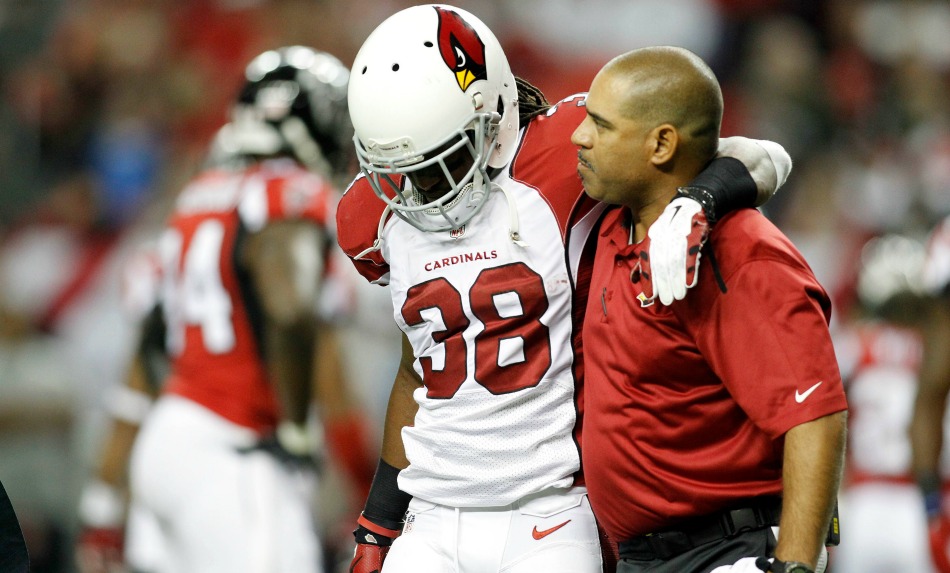 Rookie David Johnson has been dealing with injury issues of his own, forcing the Cardinals to sign Chris Johnson this week. Johnson has been in decline since the 2012 season and likely doesn’t have much left in the tank.

The Cardinals have wanted to bolster their running game the past couple of seasons—to no avail. Arizona ranked No. 31 last year, averaging a paltry 81.8 rushing yards per game with just six touchdowns and was only slightly better in 2013.

Without a running game, Arizona will be forced to utilize a high-volume passing game. Without a cohesive offensive line to protect Palmer, things could get dicey, and Palmer’s health will be at risk. And, if Palmer goes down, there isn’t anybody else behind him at the quarterback position that gives the Cardinals a great chance to win games—especially operating under the same circumstances.

In the end, while the offense has incredible potential (on paper) to blow up this year, it could be rendered impotent. A porous offensive line and, consequently, the inability to run the ball with any consistency, will prove the undoing of Arizona’s offense in 2015.