Why Seiya Suzuki is the Chicago Cubs’ X factor 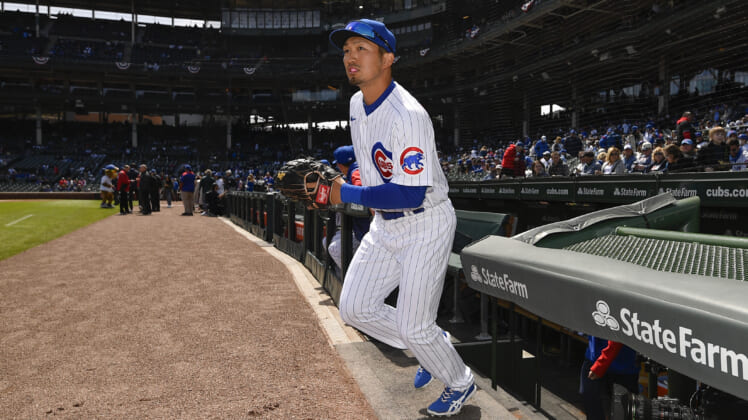 One of the more compelling moves of the MLB offseason was the Chicago Cubs signing outfielder Seiya Suzuki to a five-year, $85 million deal. Suzuki, who previously played nine professional seasons in Japan, was part of a busy Cubs’ offseason.

Suzuki has a mere week of MLB play under his belt. That said, he’s the X factor for the Cubs, as it concerns them making the National League Playoffs.

Across his first six MLB games, Suzuki has blasted three home runs, driven in 10 runs and is getting on base at a high level. He’s flat-out raking.

Suzuki has a lanky but effective uppercut swing. He gets on base at a high level through working the count, frequently putting the ball in play and swiping bags.

Suzuki is an MLB rookie but not one to the game itself. As previously alluded to, he had already been facing high-level starting pitching. He’s 27. There isn’t a physical maturation process for Suzuki. It’s a matter of him continuing to have an impact swing and at least posing a lethal threat.

Concerning manager David Ross’ depth chart, Suzuki gives the Cubs a much-needed outfield boost. While they have a handful of respectable players like Ian Happ, Jason Heyward and Rafael Ortega, their outfield rotation as a whole is lacking in offensive vitality.

Suzuki provides the Cubs with a capable everyday right fielder who enhances their club from all angles.

Chicago Cubs need Seiya Suzuki to be their identity hitter

Ross has a bevy of players who can hold their own at the plate. Despite a nightmare start, Patrick Wisdom showcased an ability to slug at a high level and hit for power last season. Frank Schwindel has flaunted power and the ability to be an everyday first baseman. Nick Madrigal hit .305 last season with the Chicago White Sox before a season-ending shoulder injury.

Happ is a proven power threat from both sides of the plate. Willson Contreras and Gomes are two of the better offensive catchers in the sport. Nico Hoerner and Clint Frazier have had their moments. Heyward and Simmons are contact hitters.

The issue with this combination of players? None of them have performed at an All-Star level or currently pose a formidable threat at the plate. That’s where Suzuki enters the picture. Again: he’s not really a rookie. This is someone who has found success hitting like a handful of MLB’s top power hitters for a decade.

Suzuki isn’t going to finish the 2022 MLB season hitting .368. At some point, he will experience a lengthy slump. The outfielder is in the raw stages of his MLB career and has an acclimation process to go through. If Suzuki remains an elite hitter when the dust settles, though, it’s a game-changer for the Cubs.

This is a respectable but little more offense. They don’t have a standout hitter. Suzuki becoming such a hitter takes some pressure off the rest of the order. He’d drive in runners in scoring position while generating offense on his own. Plus, one figures players like Wisdom and Madrigal build on their 2021 success, which makes this offense all the more dangerous.

Seiya Suzuki, Chicago Cubs’ offense is the key to a playoff berth

Starting pitching is the best thing the Cubs have going for themselves. Stroman is one of the better right-handed starting pitchers in the sport. Kyle Hendricks is a reliable, ground-ball pitcher who’s coming off an uncharacteristic season.

Miley is a proven commodity. Young starters like Justin Steele, Alec Mills and Adbert Alzolay have taken their lumps and shown promise. Drew Smyly has found success as both a starter and reliever. All in all, this is a sturdy rotation with upside. They’re accompanied by a plausible group of veteran relievers like Chris Martin, Jesse Chavez, Mychal Givens and David Robertson.

The key to a Chicago playoff run is their offense being a top-10 unit and building on some of the individual success experienced last season. That progression can be somewhat bypassed by Suzuki playing into his potential.

The National League Central isn’t anything special. While the Milwaukee Brewers are continually an NL contender and the St. Louis Cardinals are a perennial playoff threat, the division leaves some to be desired. There are some wins to be had and an extra playoff spot in both the American and National League this season.

Chicago has the makings of a .500 team. Suzuki becoming a franchise hitter raises their 2022 ceiling.