Gary Trent Jr. splashed three 3-pointers in a second-quarter spurt that allowed the visiting Toronto Raptors to run away and hide from the Sacramento Kings en route to a 108-89 victory on Friday night.

Pascal Siakam led all scorers with 32 points and Trent finished with 23 for the Raptors, who were playing 24 hours after having been drubbed 119-103 at Utah.

The win was Toronto’s fifth straight at Sacramento.

De’Aaron Fox had a team-high 17 points for the Kings, who lost for the sixth time in their past seven games.

Seeking to end a three-game losing streak, the Raptors gradually pulled away from the Kings in the second quarter after beginning the period up just 30-27.

A Dalano Banton hoop gave Toronto its first double-digit advantage at 38-28 in the third minute of the period.

The margin was just five before a 20-7 burst that included Trent’s trio of treys, giving the visitors a commanding 61-43 advantage just before halftime.

Toronto went on to lead by as many as 30 points on two occasions late in the third period.

Siakam made 10 of his 12 shots on a night when the Raptors connected on 45.8 percent from the floor. He went 3-for-3 on 3-point attempts, and Trent added 5-for-11 success from long range, helping Toronto enjoy a 36-27 point advantage from beyond the arc.

Chris Boucher chipped in with a game-high 12 rebounds to complete a double-double with 10 points for Toronto. Fred VanVleet added 13 points, and Khem Birch 10 points and nine boards.

Fox shot 8-for-13 for the Kings, who nonetheless finished at just 38.1 percent.

Chimezie Metu complemented a team-high-tying nine rebounds with 10 points for the Kings, while Harrison Barnes went for 14 points and Buddy Hield 10. 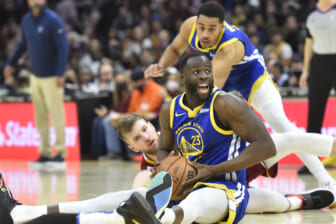