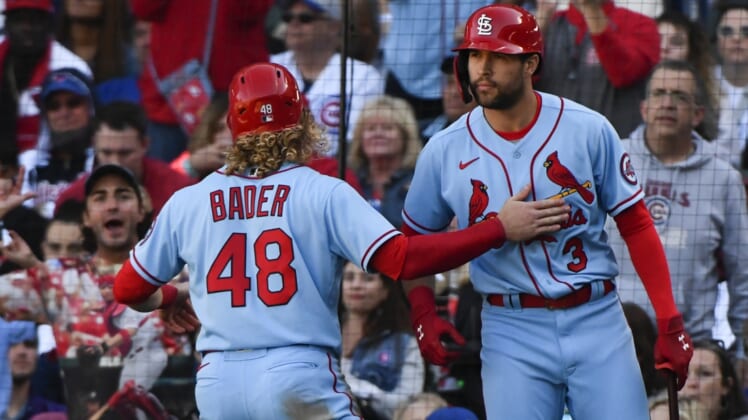 Paul DeJong hit a two-run homer and a sacrifice fly as the visiting St. Louis Cardinals rallied past the Chicago Cubs 8-5 Saturday for their team-record 15th straight victory.

Harrison Bader added a solo homer and RBI single as the Cardinals (86-69) reduced their magic number for reaching the National League wild-card game to three.

Cubs starting pitcher Adrian Sampson held the Cardinals to two runs and three hits in his six innings. Reliever Codi Heuer (7-3) retired none of the four batters he faced and allowed the decisive runs in taking the loss.

The Cubs responded by taking a 2-1 lead in the third inning as Willson Contreras hit an RBI double and Happ delivered an RBI single.

Tyler O’Neill tied the game 2-2 with a solo homer in the fourth inning.

But the Cubs moved ahead 4-2 in their half of the inning. Contreras hit an RBI single and Happ drew a bases-loaded walk.

Against Heuer in the seventh inning, Nolan Arenado hit a leadoff double and Yadier Molina, Bader and Lars Nootbaar followed with singles to tie the game 4-4.
Molina’s single was his 2,111th career hit, which moved him past Rogers Hornsby for third place in Cardinals history.

DeJong greeted reliever Scott Effross with a sacrifice fly to put the Cardinals up 5-4.

In the ninth inning, Bader hit a one-out double, stole third base and scored as Nootbaar struck out but reached first base on a wild pitch. DeJong’s homer then made it 8-4.

Happ’s solo homer in the bottom of the inning cut the lead to 8-5.