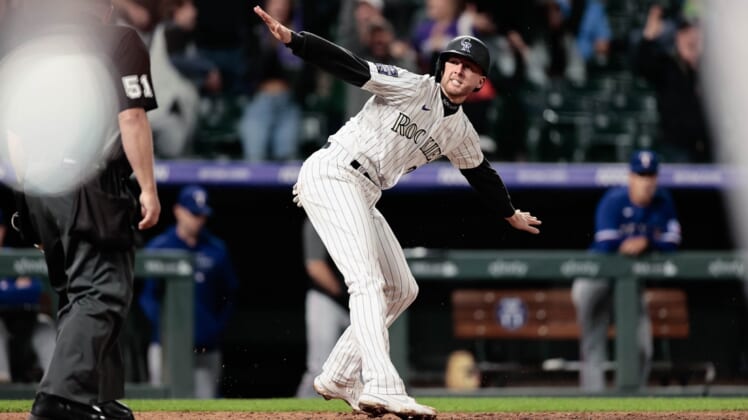 Ryan McMahon scored on a wild pitch in the 11th inning and the Colorado Rockies handed the Texas Rangers their seventh straight loss with a 3-2 victory on Tuesday.

Yonathan Daza had three hits and drove in a run for Colorado, which has won two in row following a five-game losing streak. Mychal Givens (2-2) earned the victory.

McMahon began the bottom of the 11th inning at second as the automatic runner and moved to third on Charlie Blackmon’s groundout.

Josh Fuentes was then intentionally walked before McMahon scored on a wild pitch by Brett Martin (0-2) with Brendan Rodgers at the plate.

Texas trailed 2-1 in the eighth inning before Khris Davis tied the game with his one-out, pinch-hit homer off Carlos Estevez.

Dane Dunning gave up two runs on six hits over 4 2/3 innings for the Rangers, whose road losing streak reached 13 games.

Colorado received an impressive outing from German Marquez, who allowed one run on two hits and struck out seven over seven innings while throwing 88 pitches.

The Rockies took an early lead in the first. McMahon doubled with two outs, C.J. Cron singled, and Blackmon followed with a run-scoring single to left.

Texas pulled even in the fourth when Nate Lowe drew a leadoff walk and moved to second on Adolis Garcia’s single. Joey Gallo then grounded to first, allowing Lowe to score on Rodgers’ throwing error.

Rodgers started at shortstop in place of All-Star Trevor Story, who is on the 10-day injured list with right elbow inflammation. Story is expected to return as soon as next Tuesday.

Colorado moved ahead in the sixth when Dom Nunez snapped a 0-for-17 skid with a leadoff double and scored on Daza’s two-out single up the middle.

McMahon had two hits and scored two runs for the Rockies, who improved to 17-12 at home despite going 3-for-13 with runners in scoring position.

Gallo went 0-for-4 with three strikeouts, snapping his six-game hitting streak. Texas struck out 14 times and dropped a season-high 12 games under .500.