WATCH: No. 9 Ole Miss gets to 10 wins with victory over rival Mississippi State in Egg Bowl

Snoop Conner rushed for two touchdowns as No. 9 Ole Miss set a school record for regular-season wins by topping host Mississippi State 31-21 Thursday in the Egg Bowl in Starkville, Miss.

On a rainswept night against its rival, the Rebels’ defense contained the Bulldogs’ Air Raid offense led by Will Rogers for the majority of the game and helped the visitors lock up second-place in the SEC West.

The victory resulted in the first 10-win regular season in school history.

Dontario Drummond grabbed a season-high 13 catches for 133 yards for the Rebels, who claimed their second straight series win and own a 64-46-6 advantage in the 120-year rivalry. 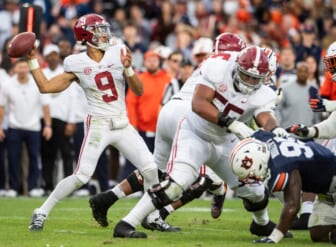 With Rebels standout kicker Caden Costa unavailable, walk-on Cale Nation connected from 25 yards on the next possession, but McCord answered from 29 yards for a 6-3 lead.

A troublesome area for the Bulldogs, the kicking game struggled later as McCord missed wide right from 40.

The Bulldogs closed the half in disastrous fashion in the red zone with a holding penalty, three dropped passes — two that would have scored touchdowns — and McCord pushing a 33-yarder wide right again.

Sam Williams’ second sack of Rogers — the defensive lineman’s school-record 12 1/2 this season — forced a turnover on downs at the Ole Miss 39 late in the third.

Corral spun into the end zone on a draw from four yards out at 11:17.

After Jett Johnson’s 48-yard interception return, Rogers hit Jaden Walley over the middle from 11 yards at 7:20 of the fourth for a score.

Jo’quavious Marks’ 11-yard scoring run and two-point conversion pass from Rogers to Makai Polk came three minutes after Ealy’s 15-yard pass reception over the left side for a touchdown.