Kellan Grady scored a game-high 19 points and Oscar Tshiebwe dominated the interior with 14 points and 20 rebounds to lead No. 10 Kentucky to a 100-60 win over visiting Robert Morris on Friday night in Lexington, Ky.

The Wildcats (1-1) earned their first win of the season following a 79-71 loss to No. 9 Duke on Tuesday night in New York. They will stay home to face Mount St. Mary’s on Tuesday night.

Michael Green III scored 12 points, all in the first half, to lead Robert Morris. Kahliel Spear finished with 10 points and eight rebounds, and Justin Winston had nine points while making 3-of-6 attempts from beyond the arc.

Robert Morris (0-2) remained winless after dropping its season opener Wednesday night against Central Florida. The Colonials will continue a difficult early-season schedule when they play Ohio on the road Monday night.

The Wildcats led comfortably throughout the second half. Robert Morris pulled within 17 points of the lead when Winston hit a 3-pointer to make it 58-41 with 16:20 remaining, but Kentucky responded with a 29-7 run to seize a 39-point lead with 5:23 left.

Collins helped to put the game out of reach for Kentucky. He had a dunk off a feed from Washington to make it 81-48, and less than a minute later he fired a pass to Grady for a successful 3-pointer to stretch the lead to 36. 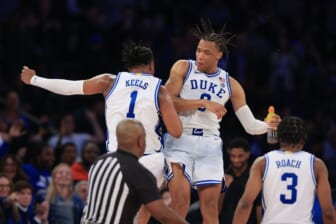 Kentucky raced to a 13-2 lead to start the game. Grady opened the scoring by draining a 3-pointer off an assist from Sahvir Wheeler, and Grady capped off the early run by converting a three-point play with a layup and a free throw with 15:44 to go.

Robert Morris pulled within 16-10 after back-to-back layups by Green III. That was as close as the Colonials would get for the rest of the half.