Keels racked up 25 points on 10-for-18 shooting from the field, and Banchero tallied 22 points by going 7-for-11 from the floor. Wendell Moore Jr. added 12 points as the Blue Devils overcame 1-for-13 shooting on 3-point attempts.

Oscar Tshiebwe had 17 points and Sahvir Wheeler scored 16 for Kentucky.

This was the start of Krzyzewski’s 42nd season at Duke. This was his 1,400th game in charge of the Blue Devils.

A Duke team coached by Krzyzewski topped Kentucky for the seventh time in nine meetings.

Banchero headed to the locker room in the second half because of cramping. Instead of fading, the Blue Devils surged, going up 61-50 before Banchero returned to the court.

But in just over three minutes, Duke had a 15-point lead trimmed to 69-65 by the six-minute mark with Tshiebwe scoring seven straight points.

Keels scored in the lane and Banchero posted a three-point play to regain control for Duke. Kentucky went through a scoring drought of more than three minutes. 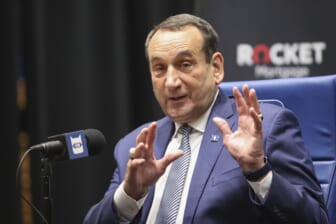 Kentucky kept it close because six of its 13 first-half field goals were 3-pointers. Duke was 1-for-9 from long range before the break.

Five Kentucky players had two fouls each by halftime, so the Blue Devils held a 12-3 scoring edge on free throws in the first half.

Kentucky took its first lead in the second half, going up by one point a few times before Duke secured momentum.