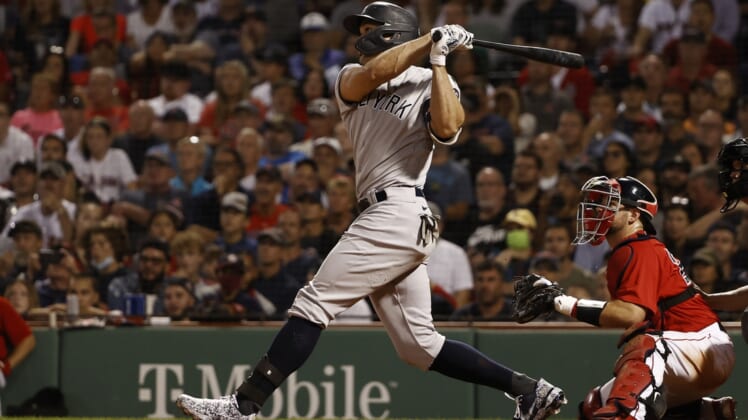 Stanton’s first-pitch blast gave the Yankees (88-67) their first lead of the contest. The slugger homered and had four RBIs in a New York win Friday to kick off the pivotal three-game series.

The visitors extended their winning streak to five.

Bobby Dalbec homered in the ninth for the Red Sox (88-67), who had won seven in a row entering the series.

Down 2-1, the Yankees’ first two batters of the eighth struck out against Tanner Houck. Brett Gardner and Aaron Judge each worked walks before Darwinzon Hernandez took over on the mound and plunked Anthony Rizzo.

Stanton pummeled a fastball out of the park to left-center for his 33rd home run and a 5-2 lead.

Luis Severino struck out a pair in the bottom of the eighth. Aroldis Chapman served up Dalbec’s one-out homer and hit a batter before getting the final two outs for his 29th save.

Houck (1-5) had walked the first two Yankees he faced in the seventh on four pitches each before getting a double play and a strikeout to maintain Boston’s one-run lead.

The Yankees got on the board in the sixth. Red Sox starter Nick Pivetta, who had allowed just one baserunner on a second-inning single, gave up a Gio Urshela single and Gardner double to put two men in scoring position with one away.

Hansel Robles came on and allowed Urshela to score on a wild pitch to make it 2-1. He retired Judge and Rizzo to end the threat.

Kevin Plawecki’s solo shot in the bottom of the third put Boston on the board.

In the fifth, Judge robbed Dalbec of what would have been a two-run homer with a reach into the bullpen in right. The Red Sox would load the bases with one out but only scored one on a Michael King wild pitch for a 2-0 edge.